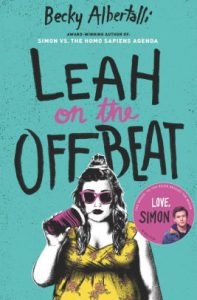 Leah feels like she’s always on the off-beat. She loves to draw but is so self-conscious she barely shows anyone her drawings, let alone allows herself to think about selling them for money. Her mother is much younger than the parents of her friends, and currently dating a man Leah thinks she is way too good for. She’s bisexual, but is uncertain about coming out to her friends, even openly-gay Simon. And, to top it all off, she’s starting to get feelings for someone she really shouldn’t – someone that could cause tensions in her friend group she really doesn’t want to cause. Sometimes it feels like the only part of her life that is on beat is her drumming.

Leah on the Offbeat is what I like to call a Sequel-But-Not-Really. It takes place in the same universe as Becky Albertalli’s debut novel Simon vs. the Homo Sapien Agenda and includes the same characters. Instead of being told from Simon Spier’s perspective, however, it is told from Leah Burke’s. This is what adds the “But-Not-Really” to the Sequel, because by placing ourselves in Leah’s shoes instead of Simon’s, it feels like we’re entering an entirely different world.

One of the things I loved the most about Simon vs. the Homo Sapien Agenda was how honest and realistic Simon’s voice came through in the writing. This easily became the thing I loved the most about Leah on the Offbeat as well. I don’t know how Albertalli managed to get into such different character’s heads so perfectly, but she did it. Leah is nothing like Simon, and yet she is just as real. It never felt like I was reading a piece of fiction. Instead, it was like someone was narrating their life to me (even more-so considering I listened to this as an audiobook).

In her realism, Leah is just as frustrating as she is encouraging. The biggest thing that holds Leah back throughout the entire novel is herself. Almost every bad decision she makes is born out of a lack of self-confidence and anxiety, and is therefore self-inflicted, which can sometimes make it difficult to feel sorry for her. The good thing about this, though, is that Leah grows. She becomes more confident as the story goes on, more self-aware, and less likely to become a self-fulfilling prophecy. By the time the story ends she still has a long way to go, but she’s moving forward. It’s incredibly satisfying.

The love story is my other favourite thing about this book. I don’t want to say too much, because if you haven’t read this book yet then you deserve to experience every moment of Leah falling in love for yourself, because it’s amazing, and hilarious, and cringeworthy, and messy, and so, so, so worth it. It was more than I could have hoped for, and I hoped for a lot.

Because I read this as an audiobook, I feel the need to include a small bit of praise for Shannon Purser, the reader. I found she did an amazing job at bringing the story, and Leah in particular, to life. She had great inflection and was super clear. I highly recommend giving it a listen!

Overall, Leah on the Offbeat not only holds up to its predecessor, but I would go so far as to say surpasses it. Leah is charming, and frustrating, and kind, and obnoxious, and warm, and real. She’ll worm her way into your heart and force you to cheer for her, even when you don’t want to. She’ll throw you right back into your teenage years, for worse and then for better. She’ll remind you of what it’s like to be a young girl falling in love with a girl for the first time in all the best ways.

I cannot recommend this book enough.