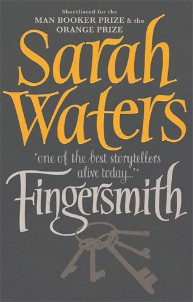 Sue Trinder has been brought up to be a fingersmith – a petty thief. She lives with a baby “farmer” named Mrs. Sucksby, who has raised her as her own. One day, a man known to Sue as Gentleman arrives at Mrs. Sucksby’s house to enlist Sue’s help in a plot to gain the fortune of a lady. Sue is to be the maid of the lady, Maud Lilly, and convince her to marry Gentleman, after which they will abandon her to a madhouse. With the promise of a share of the lady’s fortune, Sue embarks on a journey away from the home she’s always known, unknowingly entering into a game far more dangerous than she could have expected.

Over the past few years, I’ve sometimes felt like I am the only queer woman in the world who has not read Fingersmith (or any Sarah Waters’ novels, for that matter). Well, maybe not the only one, but one of a handful. After years residing on my dauntingly large “to-read” list, I finally managed to pick it up, and oh, was it worth the wait!

Mystery is possibly my favourite genre, and Fingersmith delivered more than I could have hoped. I knew it would be a twisty tale, but I did not realize going into it just how many twists and turns the story would take. Every time I felt I’d just regained my footing after a plot twist, Waters threw another at me. Some were a little predictable, others caught me completely off-guard. Because of how many mystery novel’s I’ve read in my life, let me tell you, that is a pretty hard thing to do.

The love story is subtle, but poignant. There are very few explicit mentions of the women’s feelings toward each other until the end of the novel, and even then, it is dealt with in a way true to its time. Still, you can’t miss the obvious love these two women feel for each other, and despite all the deception and backstabbing they involve each other in, you can’t help but root for them. [Major spoiler] I also have to mention how wonderful it was to see a story like this end on a hopeful note for its lesbian protagonists. It would have been very easy for Waters to write their feelings off as a fluke, or to have them move on from one another, but instead she gives the reader, and the women, hope. It was refreshing, and allowed the story to end on a hopeful note, something I didn’t think would be possible [end spoilers].

If you have not read Fingersmith yet, I highly encourage you to do so. Although not technically considered one, I would easily classify Fingersmith as a classic. That being said, it is not without it’s warnings. There is a lot of explicit ableism and abuse (one extended scene of abuse taking place in an asylum had me cringing the entire time I read it). There are hints of rape, and very strong implications of a pedophilic relationship, as well as of pedophilic feelings from several men. [Major spoiler] A young woman is made to read sexually explicit stories aloud to men from a young age. As well, a character heavily implied to be gay dies in a very violent way [end spoilers].

If these are all things you can look past, I strongly encourage you to pick up Fingersmith if you can. Trust me, if you’re like me and haven’t read it before, you will be so happy that you did.