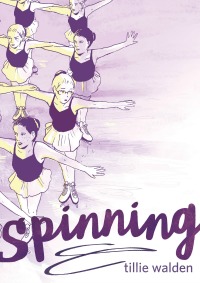 Spinning is a graphic memoir by Tillie Walden about the ten years she spent as a competitive figure skater. It’s beautiful and compelling, but in some ways it’s a hard read.

Everything I know about skating I picked up from Yuri!!! On Ice fandom, so I couldn’t speak to how accurate it is, but her explanations of how figure skating, jumps, and synchronised skating works are fascinating. Especially because she does touch on the explicit feminine coding and potential toxicity of enforcing that on kids! But learning how different moves are structured and how much work goes in is fascinating! Especially because while it structures and shapes Tillie Walden’s life throughout Spinning, it’s not the only thing going on.

The narrative is very narrow in its focus – it’s very deeply into Tillie Walden’s experiences and feelings in a way that works well with the structure of the narrative. The afterword specifically says that it was deliberate; it was about “sharing a feeling” rather than the specific events, and it is definitely successful at that. It frees her from doing a linear chronology, and lets her group events by feeling or what makes sense, which means that it’s more of a coherent story despite being a memoir.

The specific events swing between hopeful and exciting to bleak within the space of pages – the demands of skating and Tillie Walden’s coping strategies to deal with exhaustion and despair are really well depicted. The bleakness and monotony of her feelings towards skating are really well contrasted with her feelings for art and music as her interests change and move; the fun she has with her friends and the validation she gets from winning contrast with her feelings of fear. Her relationship and and coming out also come under this, but neither of which go well so brace yourselves for on-page homophobia. The way that Tillie Walden talks about her first relationship bringing her fear as well as everything else young love is supposed to bring is heartbreaking.

Tillie Walden’s regrets – that her bully left the school before she found the courage to stand up for herself; that she wasn’t a better friend, that quitting skating was so anticlimactic – were all completely understandable and relatable, and the way the art conveyed them made me feel for her. The art is great, and it has a lot of the things that I loved about “i love this part” – it has a limited pallet of dark blue, grey, and yellow, which was used to great effect to convey the mood without words. I especially love the way that she’ll give a quiet moment an entire page to itself to let its emotional weight rest, especially because most of the book has a very regular page structure.

Spinning is a really interesting, emotional, and compelling memoir that works really well with the art to tell its story. It also left me completely emotionally drained by the time I was done with it, which is a recommendation if that’s what you’re in the mood for!

One Reply to “Susan reviews Spinning by Tillie Walden”