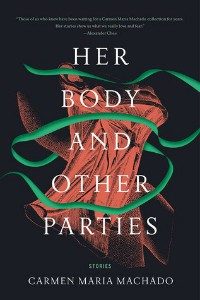 In this collection of short stories, Carmen Maria Machado does what skilled horror writers do best: she examines real-world beliefs through a lens that highlights that real horror isn’t monsters, but our own societies. This collection grapples with the trauma and horror women and women’s bodies are put through by a patriarchal society that wants to see them submit.

In the first story “The Husband Stitch” a woman gives her lover everything he desires but keeps one thing to herself–the secret of her prized green ribbon. He’s so entitled that he constantly demands to know why she’s so attached to it, but she refuses to give him this one thing she wants to be hers. They even have a son together and one day after hearing his father ask about the ribbon, he asks about it too, but she doesn’t tell him, creating a rift between mother and child. It’s a poignant moment that illustrates how toxic masculinity is taught and passed down from one generation to the next. Finally, at the end of the story, tired of the questions and demands, she lets her husband remove the ribbon and her head falls clean off. It’s a not so subtle metaphor displaying how the demands and entitlement of the patriarchy end up killing women.

“Mothers” tells the story of a woman left with a child she doesn’t really want, not without her partner at least, who left them. But Machado’s narrative twists to make it seem like the main character had a mental breakdown and that the child, Mara, never existed. Rather, it appears as if the protagonist has broken into another family’s home and abducted their daughter. What made this story particularly scary was the inability to tell which narrative was real. It’s a tale that plays with reality and the psyche.

Machado dives into pop culture with “Especially Heinous – 272 Views of Law & Order: SVU.” Each snippet acts as a summary of an episode, but they’re not episodes of the real show. At least, that becomes clear as the story goes on. But at the beginning, it’s truly hard to distinguish if the synopses are real or not as they sound like actual plot lines from the series.

In “Real Women Have Bodies” an employee of a boutique fashion shop witnesses the strange phenomena of women disappearing and becoming invisible beings. They haven’t died, they’re just no longer corporeal. Even more horrific, these women are getting stitched into the very clothing the store sells, showing the still solid women stepping into their places. With this tale of horror, Machado depicts how the patriarchy keeps women controlling each other, doing men’s dirty work for them.

Every story features a queer main character, making the horrors and trauma they experience that much more terrifying. Because even though these are fictional stories, are they? Haven’t queer women–specially queer women of color–been subjected to unspeakable horrors in real life? At what point do stories and reality merge? Machado’s writing truly leaves readers with a sense of unease in trying to untangle those threads.