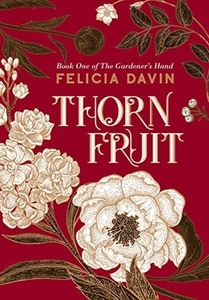 Alizhan has grown up in the noble house of Iriyat ha-Varensi, using her secret powers to read people’s minds. The downside of her powers is that she can touch someone or be touched without causing extreme pain to both her and the other person. It is because of this that her life has been lonely with only Iriyat for brief moments of painless touch, but the woman who rescued her from an orphanage is keeping many secrets of her own.

Besides Iriyat, Alizhan has Evreyet Umarsad. Going by Ev, she has grown up on a farm with her loving parents and taken the cart every week to the market to sell her thornfruit. Every week, the same thief steals her thornfruit, but Ev is fond of them. This thief is Alizhan, and she has no one else to turn to when she starts to unravel a complex plot involving her powers, Iriyat’s secrets, and an unknown number of innocent lives.

This was a great book! Alizhan and Ev were wonderfully real. Alizhan definitely felt like someone who grew up isolated and was completely unfamiliar with any sort of human interaction. She was adorably earnest though! Ev was equally realistic in being more down to earth and realistic, while also repressing her attraction to women. Both of them have been isolated in different ways and in finding each other they find they aren’t so alone. The two of them were engaging and watching them slowly grapple with their feelings for each other was wonderful.

The world building was probably my favorite part besides Alizhan and Ev. There are no days and nights like we have in our world, it’s day all the time and they split their time into “shifts”. Night is a whole place, called the Nightward Coast. In addition, there are waves that will wreak havoc and deadly medusas deep in the ocean.

The plot starts off as a kind of mystery and then turns into a chase mixed with a heist. It was intriguing and exciting. It’s balanced between the big picture of the political implications and the smaller day-to-day trials Alizhan and Ev have to go through such as finding money to continue their investigation.

Altogether, I thoroughly enjoyed this book and I avidly look forward to reading the sequel. If you’re looking for a fun, intriguing, fantasy romance I highly suggest picking this up.