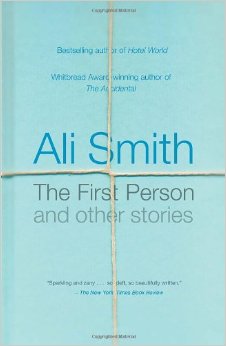 My journey through The First Person and Other Stories, a collection by British writer Ali Smith, manifested as a perpetual pendulum swing between rapt attention to the tales’ unfolding and an uncomfortable sense of groundlessness mingled with a fair degree of alienation. I’ll admit, at several points along the way, I entertained the idea of abandoning the work, just before I was drawn back in. Midway through, it dawned on me. I wasn’t responding to the merit of the writing itself; I was reacting to the way in which the writing was affecting me.

Several of the most poignant stories are written in the first person, addressing “you,” which can’t help but to hit pretty close to the bone, especially given that all contextual clues lead to the understanding that “I” and “you” are former lovers. Boasting a couple of bruised egos, a few resentments and a whole lot of ambivalence, the relationship is revisited and perhaps even reconvened via the rewriting of history. If we can assume that it is the same couple featured throughout the collection, we begin to glean a deeper understanding of both women and their history as we witness their interactions at various junctures.

Among these particular stories, I found “The Second Person” to be most engaging given how very ludicrous we civilized adults can be when protecting our heart in the presence of the woman to whom we once offered it so freely. Claiming to know who the other person truly is and how she would behave in an utterly rhetorical circumstance, the first person narrator describes with utter certainty the way in which her former lover would purchase an accordion with very specific qualities “precisely because” she can’t play it. The former lover then retaliates with her own version of how the scenario would play out had the narrator been the one to make the visit to the music shop. The entire progression and escalation of the conversation is priceless.

I’d have to note “Writ” as perhaps the most touching piece within the collection as the narrator sits across the table from her fourteen-year-old self. Witnessing the expression of insolence that her younger visage “makes a thing of beauty,” she finds herself quite proud; and, while she yearns to give her a heads-up as to who she ought to trust as well as who to and not to bed, she also aches to provide assurances that things are going to turn out alright. She cannot utter any of it, however, for the journey lies in the unknown, which should be denied no one.

From my perspective, the most disturbing tale by far was “The Child,” which initially struck me as simply absurd until I picked up on the greater meaning. The story opens with the narrator’s discovery of a chubby, blond-haired, “embarrassingly beautiful” baby boy in her grocery cart when she returns from tracking down bouquet garni for her soup. As adorable as the child may be, surrounded by strangers gushing over his loveliness, his behavior in private becomes quite another matter. When alone with the narrator, who finds herself developing an increasing tenderness for him, the baby unleashes a flurry of horrifyingly misogynistic and otherwise offensive jokes and pronouncements most frequently attributed to those on the far religious right. One might deduce that the child’s attitudes serve to align motherhood with an overarching culture of women’s oppression.

I wasn’t quite as keen on “True Short Story” and “Fidelio and Bess” as well as a couple others merely because they didn’t resonate with me. They also tended toward the more experimental, and I fear I didn’t appreciate Smith’s approach as well as someone else might. There were also a few instances in which her stream of consciousness tested my patience, compromising my willingness and ability to follow along.

Smith does indeed push the envelope in exploring the boundaries, whether real or imaged, of the short story form. Time and time again, she appears to break all of the cardinal rules of writing, only to create a more profound impact than one would expect, regardless of how true-to-the-rules it is crafted. Each story is written in incredibly simple language yet contains more nuance than can be grasped in a single read-through. Just when I felt that Smith was betraying the basic tenet of “show, don’t tell,” I discovered that very little of what was happening actually appeared on the page. It was all written between the lines.

Playfully scoffing at our tendency to seek absolutes and a tidy resolution, Smith illuminates the contradictions inherent within our nature as well as the messiness of our attempts to reconcile the incongruent parts of ourselves with the most vulnerable parts of those we love. Just as there’s likely a bit of the autobiographical within the writing of The First Person and Other Stories, there’s little doubt that, as readers, we can expect to find our most imperfect selves mirrored within the “I” and “you” as they appear upon and beyond the page.