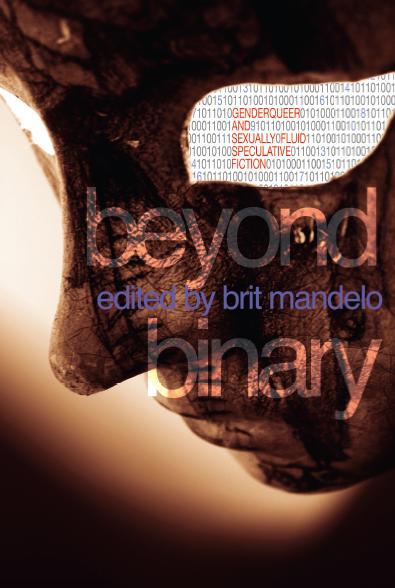 Read Beyond Binary. It fails, as an anthology, to go very far beyond male/female straight/gay conceptions of gender identity and sexual orientation. It fails to showcase worlds and characters that universally accept identities and orientations that lie beyond expected binary norms. Some of its stories are weak and ambiguous; some end with characters in situations where doubt and rejection plague their lives.

But read it anyway, for the handful of sharp, strong, thoughtful, sexy stories that ground this anthology–stories where the writers and characters question and reshape identity in new ways and with sure, steady voices.

Read it for Kelley Eskridge’s novella “Eye of the Storm,” a story so clever you might not even notice the sleight-of-hand at work–you’ll be too busy wrapping yourself up in the story of a survivor, very literally, fighting for love (and sex).

Read it for Liu Wen Zhuang’s “The Metamorphosis Bud,” a tie with “Eye of the Storm” for my favorite in the collection. In “Bud,” you’ll meet an old woman who takes waking up with a penis in contemplative, practical, non-sexual stride.

Read it also for the stories that you’ll like but not love (mine would be Keyan Bowes’s “Spoiling Veena,” Catherynne M. Valente’s “Palimpsest,” Tansy Rayner Roberts’s “Prosperine When It Sizzles,” and Nalo Hopkinson’s “Fisherman”). Read it for the stories you’ll have doubts about (I thought Keffy R.M. Kehrli’s “Bonehouse” and Katherine Sparrow’s “Pirate Solutions” were unconvincing and underdeveloped, and still don’t see how Richard Larson’s lesbian-coming-out “The Ghost Party” goes beyond binary). Read all of these stories (and seven more that I haven’t mentioned), and come away thinking. What does go beyond the binary? Which of these stories have pushed past it? Which haven’t? And which ones tell a good (or bad) story, either way?

One Reply to “Jasper reviews Beyond Binary by”