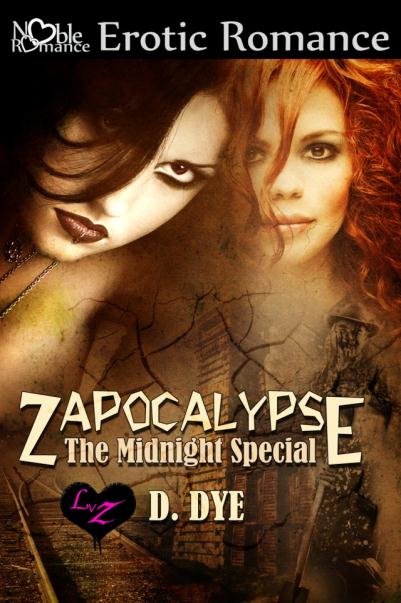 I feel as though Lesbian Zombie Literature is the new genre to look out for. We seem to have gotten quite a few books like this to review lately! D. Dye’s Zapocalypse: The Midnight Special appealed to me the most because it is set “in some hick-ass town deep in the swamps of southern Georgia”. Sounds about two skips and a jump from where I grew up.

This was a fun, quick little read, and I do mean quick – it was 44 pages long. Our protagonists are Gina and Ginger, who moved to the town of Ewahitchka, Georgia after college. (Interesting side note: There is no actual Ewahitchka, Georgia, but the name is one letter off from Wewahitchka, Florida – wonder if the author hails from there?) Horror movie fans and diner waitresses, they are who the town turns to when their loved ones start becoming mysteriously infected. But is the mysterious infection caused by nefarious biological engineering? Or are zombies just naturally made?

I really enjoyed this novella – the characters are enjoyable, the sex scenes are wonderful and hot, and the narration had a Southern feel. The narrative is interspersed with Creedence Clearwater Revival lyrics – the characters’ favorite band – and while I was familiar with the songs, I’m not sure if the way the lyrics wove through the story was totally successful. There were a few grammatical errors – just some wayward punctuation, but let’s close parentheses and end sentences with periods, not commas!

I think that my largest caveat about Zapocalypse is that it was just too short. Our heroines’ zombie-killing only lasts for a few pages, and then suddenly the entire story is wrapped up and tied with a neat bow. There was only one scene in which I felt the characters were in danger, and I think that danger is an important element of a zombie story – one has to be careful when avoiding the undead! The story was delightful, the characters enjoyable, but the climax and denouement were entirely too swift. That being said, I would be interested in a sequel, should Dye decide that Gina and Ginger will throw the dart to the map and pick a new place to live. Let’s just hope any further installations are a little more fleshed out, story-wise.