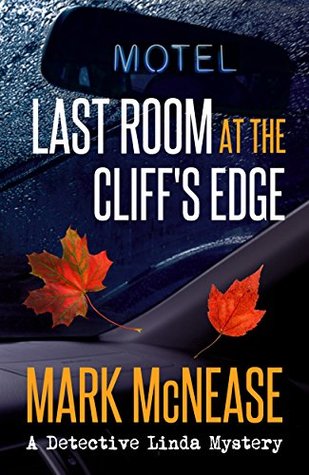 In the interest of full disclosure, I would like to make it known that this is the first murder mystery that I have read.  Due to my unfamiliarity with this genre, I admit that I may not be fully skilled in appreciating the nuances.  I think it’s important to note that this book contains descriptions of violence and sexual violence, which may be triggering for some readers.
This story takes place in the eastern United States.  The majority of the action occurs in a small town in which nearly everyone is queer, an accessory to murder, or both.  As the title suggests, the action centres around the Cliff’s Edge Motel, a local eyesore that residents of the town tend to steer clear of, unless they have nefarious actions that need to be carried out in a place of ill repute.  The protagonist is Linda Sikorsky, a retired police detective.  She and her wife, Kirsten McClellan, are driving to a writer’s retreat in Maine so that Kirsten can polish the final draft of her first novel.  When they are waylaid by inclement weather, they find themselves at the Cliff’s Edge Motel.  They decide to stay for the night in hopes of waiting out the storm.  Linda wakes to the sound of a struggle taking place in the next room, and the story goes from there.
This isn’t so much of a murder mystery, or at least not how I imagine a murder mystery should be laid out.  We know immediately who the murderers are and see who is working for whom.  I guess the interesting part of the read is supposed to be watching the retired detective work her magic in discovering useful tidbits of information and piece together the clues.  Major revelations regarding the back story of the characters and the underlying motives of the villain are made towards the end of the book, but by that point we have been presented with so many grisly and disturbing actions that these barely raise an eyebrow.  Sure, they explain the reasons behind the characters’ actions, but they are just drops in a bucket of indecency.
Linda’s partner seems to primarily act as a prop with which the author lays out Linda’s thought process for the reader to see.  Kirsten asks the, “why did you do that?”-type questions, and then we, the reader, learn the motives and methods of the detective through her response.  The relationship between Linda and Kirsten is unusual to me.  There isn’t a lot of affection shown between the characters, and a lot of the time it seems like Linda is merely tolerating her partner’s questions, not really appreciating her presence.  Maybe this is part of the cut and dry, rational, methodical, cold temperament of a former police detective, but to me it seems like there is distance between these two people.  You deserve better, Kirsten.
To me the most interesting character in this story is not the protagonist, but the villain.  McNease succeeded in writing a bad gal that you love to hate.  Meredith is manipulative and evil.  This deranged personality type is fascinating in a morbid, terrible way.  I am so glad to not associate with people like this in real life, and personally, I’m glad that I don’t spend too much time reading about theses types of people, either.
One thing in this book that I thought interrupted the flow was that all of the queer characters instinctively knew that the others were queer, and the author made a point of detailing this.  Everyone’s gaydar is off the charts.  As a person who is guilty of incorrectly assuming that every woman in a cowichan sweater is queer, I am baffled by the laser-like accuracy that these homos have in pinning one another down.
I am not the kind of person who watches crime shows because I have a difficult time watching people be mean to one another.  It seems that this aversion to ingesting suffering for the sake of entertainment also extends to reading descriptions of cruelty and malice.  I’m not saying that this book is poorly written or not well thought out, but I am saying that it’s not my cup of tea.  I like to read books that make me come away feeling happy or hopeful or thoughtful, or that contain beautiful prose, or that give me a different lens through which I can view the world.  Although it didn’t meet this high standard, this book did keep me occupied during a 13 hour drive from Smithers to Vancouver, so for that I’m grateful.