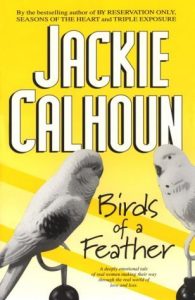 Birds of a Feather by Jackie Calhoun is one of the most depressing books I’ve ever read.  And no, I haven’t read The Well of Loneliness.  It is hard for me to think of a single moment of joy in Calhoun’s contemporary romance (published 1999).  I use the term “romance” loosely, because romance seems to be as absent as joy is.

In the story, we follow Joan McKenzie, a divorcee nearing fifty whose first relationship with a woman has ended.  She lives in Wisconsin, works two jobs to make ends meet, and enjoys birdwatching and spending time with her dog Yeller in her off hours.  While she’d like to find love again, she feels conflicted about which woman she wants to pursue and the type of relationship she would like to have.  She is intrigued by enigmatic, bisexual Linda. Sturdy, sporty Liz is a friend of Linda’s who also captures Joan’s attention. And then there is her longtime best friend Diane, who is in a committed relationship with Tania, but for whom Joan has undeniable feelings.

Overall Joan’s life feels stagnant and purposeless, which I initially assumed was intentional on Calhoun’s part.  However, there is no character arc to be found here. Joan remains in precisely the same directionless, unfulfilled place when the novel ends as she was at its beginning.  The extreme stagnancy of Joan’s life translates onto the page and makes for a suffocating, almost hopeless, read. It doesn’t help that Calhoun devotes lots of page time to mundane details such as what people ate, the specific make and model of their vehicles, etc.  It’s a short novel, but I didn’t find it to be a particularly quick read and I had no trouble setting it aside to read other things. The level of dramatic tension is not high.

One of the reasons I was not drawn into the book was because I did not find Joan to be a particularly relatable (or, at times, even likable) character.  I didn’t fully understand the motivations for her actions, and she could be snippy with her friends and downright selfish in her romantic pursuits. I was rooting for her to find happiness, but I didn’t find her to be a particularly engaging character and following her life was a claustrophobic experience at times.

As you can probably tell, I would not recommend Birds of a Feather.  The writing is grammatically sound and the book is readable (I did make it through to the end).  What it is not, however, is enjoyable. Worst of all, it offers what I found to be a dim, gray, bleak portrait of lesbian life.  Readers seeking positive portrayals of sapphic women and relationships should definitely look elsewhere.

Jess H. is a late blooming Gen Xer who came out in her 30s.  She enjoys reading lesbian literature to further explore her identity, works as a consultant in the IT field, and keeps such a low profile online that she can’t readily be found on social media.