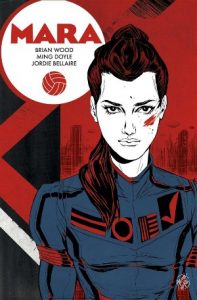 Mara is a comic trade about Mara, a 17 year old who’s been trained as a professional athlete since she was 4 years old. This is her whole life, and in this future world, athletes are the peak of celebrity, and Mara is at the top of it all. When a broadcast of her game reveals her manifesting super powers, though, the life that’s been set for her starts to crumble.

I have to admit, I felt conflicted about Mara. When I was midway through, I though the ending would help me resolve my feelings, but that didn’t help. It wasn’t until I was flipping through it again and notices the very first page, which has just the text “A COMING-OF-RAGE STORY” that I began to understand what this story is doing.

Mara has had her whole life decided for her. When she was 4, she was sent to a training camp, and since then, all of her time has been dedicated to training and securing sponsorships. She has a relationship with a teammate, Ingrid, but that isn’t explored much in the narrative, other than the press speculating about it. The super powers she acquires are wide-ranging, incredibly powerful, and entirely unexplained. It is quickly obvious that she is now on a completely different plane from other humans, and she tires of the military (and society in general) trying to control her.

She’s a teenager, and she’s justifiably furious at a world that has stripped her of choice and of the people she loves. It’s interesting to see a character with super powers who becomes apathetic to the world. She’s not a villain or a hero: she’s completely disinterested in human beings. She’s not prey to their judgments anymore, and she never will be again.

This is a very quick read, and Mara’s journey has a lot of similarities to Doctor Manhattan. Also, to admit my own bias, and I’m sure the bias of most Lesbrary readers, I wanted more from the Ingrid/Mara relationship than a few pecks and everyday conversations. I didn’t get a sense of emotional closeness from them, and if they weren’t close, what was the point of the relationship at all?

It made for an interesting afternoon’s read, but I wanted more from it. It felt more like a thought experiment that anything. If this was a continuing series, I’d be interested as to how it would play out, but as a stand-alone volume, it felt weak.