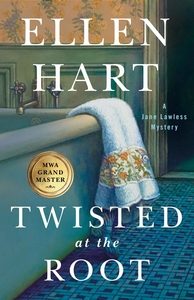 I’m pretty new to reading mystery novels, but I picked up Ellen Hart’s previous book and enjoyed it, so I thought I would give this a try. It’s part of the Jane Lawless series, which has been going since 1989! Jane is a part-time restaurateur, part-time private investigator. There is a big cast of characters, obviously growing in size as the series continues, but I found it pretty easy to jump in at this point.

I can definitely understand why cozy mysteries are popular! Reading about Jane sitting in front of a roaring fire, dog curled up her side, going over her thoughts about the case–I can see how this subgenre got its name. It was a book I wanted to read leisurely, not racing to find out the final reveal, but enjoying the ride to get there.

Unfortunately, I didn’t enjoy this as much as A Whisper of Bones, and that was primarily because of the characters involved. Although there were some that carried over who I enjoyed seeing again: Cordelia, her theatrical (in every sense) best friend, and Julia, her on-again-off-again girlfriend. Jane and Julia’s relationship is flawed and intriguing; I’d like to see how it began. The new characters, though, grated on me. Jane’s brother makes an appearance, and I’m not sure if he is a regular in the series, but I didn’t connect with him, partly because he seemed almost interchangeable with one of the suspects, Eli. [spoilers: they are both ex-drug addicts with a marriage that fell/is falling apart, and they both want to be with Kit despite that clearly being a terrible idea.]

Kit was a character who grated on me. It’s not that she wasn’t believable: I’ve known toxic people like this, and I get the allure. But it’s not just one person who is so attracted to her that they don’t notice her flaws: it’s basically every guy she runs into. This is the woman who married her boyfriend’s dad while said boyfriend was in rehab. There are some definite red flags there! [spoilers: I hope we’re not supposed to be invested in Jane’s brother as a character, because I lost all respect for him when he continued to be pulled in by Kit despite overwhelming evidence that she was in the wrong.]

I think the Jane Lawless series is strong, and I will come back to it (maybe from the beginning this time), but this one felt like a weak point to me. The mystery didn’t feel like much of a puzzle, and the introduced characters were forgettable and sometimes interchangeable. Characters are a big part of what I concentrate on in a book, so that was a letdown for me.