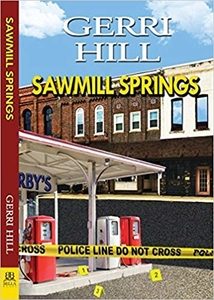 Sawmill Springs, while not perfect, is what I’ve been wanting from Gerri Hill’s police procedurals all this time: a competent-enough mystery with less of the gender- and sexuality-absolutist nonsense that’s put me off her other books. Sawmill Springs is about Murphy, a former Houston homicide detective, and Kayla Dixon, a former FBI agent, who both independently decided to move to small town of Sawmill Springs in search of a quieter life… Which they don’t get, because shortly after their arrival, the murders begin.

The depiction of Sawmill Springs as a small town was pretty good for the first half of the book – Gerri Hill manages to create a real sense of a place where everyone knows everyone else (and their business), although sometimes the characterisation of the town as a small, quiet place goes a little too far – you really expect me to believe that a police officer doesn’t know better than to gossip about the details of the case? Or that people need to be kept out of crime scenes? Or that someone would extend their “But they can’t be the killer! I’ve known them all my life!” field to an entire town? As this lack of professionalism and lack of resources is the cause of half of the drama on the investigation front, it’s a bit jarring when the characters are isolated for the second half of the novel and suddenly no longer have to deal with these problems.

I also had a slight problem with the resolution of the mystery, in that it felt too obvious and too simple to me; it felt like the book was setting up a bigger, more emotional pay-off with the mysteries of “Who is Mr X? Is there more than one killer in town?” weaving into the actual murders, but no! I might just be disappointed because it means that a character that I thought was playing at incompetence while actually masterminding the whole affair is actually just really bad at their job, so the tension and the mystery just dissipated without any real payoff, and the plot holes than I thought were foreshadowing were never resolved.

As for the romance: I actually liked most of it! Kayla and Murphy actually have decent chemistry and bounce off each other well, but I wasn’t really impressed with the artificial drama created by Murphy’s assumption that Kayla was straight. In isolation, it probably wouldn’t have bothered me, but in the context of Gerri Hill’s other works it felt disappointing – especially because the assumption seemed to be based entirely on the fact that Kayla is femme and married a man once. Could the constant flirting Kayla did suggest that she was bi? Who knows, it’s never mentioned as a possibility. The other thing that bothered me was that the sex scenes and romantic confessions seemed really weirdly placed. “Running away from a serial killer” is maybe not the best time to evaluate your relationship? And the chapter transition that went straight from “discovering a corpse” to “in media res of a sex scene” without any pause or decompression was terrible pacing. So bad that I had to check the book to make sure I hadn’t accidentally skipped some pages!

Basically, the mystery was slightly disappointing, but the romance was probably one of the best in all of the Gerri Hill books I’ve read. I think if you want to read Gerri Hill’s works, this is the best place to start!