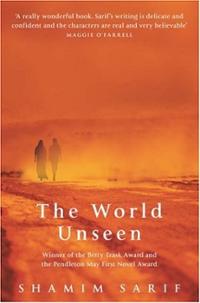 I had high expectations for this book. I’ve heard really good things about Shamim Sarif, and one of my favourite lesbian movies is I Can’t Think Straight, which is based on Sarif’s novel of the same name, and is directed by her as well. I was actually so confident about this that I saved it until I really wanted a book I was sure to like. Unfortunately, it didn’t live up to that for me.

I was really intrigued by the setting for this novel. I haven’t read many books that take place in South Africa during apartheid, and I definitely have never heard a story involving an Indian community in South Africa. Although this was interesting, it ended up being distracting to me. Despite the setting, apartheid is really only a subplot in the novel. Although the main characters do experience racism, they don’t face the sort of brutal treatment that black Africans in the same community do, and those characters are minor and seem undeveloped. It seems odd to set the story during this time period if you’re not going to really deal with it in a major way.

On top of that, [spoilers, highlight to read] one of the black African characters that we do get is Amina’s biological grandfather, who was a servant? worker? who raped Amina’s grandmother. Why you would include a story about a poor black man raping a more well-off non-black woman in a story that should be about antiracism is beyond me. [end spoilers] This seemed completely unnecessary, especially since there are only really two other black characters in the novel, and only one who gets a minor subplot (Jacob, Amina’s business partner).

Add to that the mentally ill character who seems to exist only to show how hard done by Miriam is for having to take care of her [spoilers] (except when she exists as a plot device to unintentionally betray her sister-in-law) [end spoilers] and I was really pulled out of the story. The (main) characters were strong, and I liked the dynamic they had, but the plot and romance were not strong enough to draw me back into the story. Finally, the weak conclusion made me a little regretful I had picked it up at all.

I will probably still give I Can’t Think Straight a try, because I loved the movie so much, and because The World Unseen is Sarif’s first novel, so hopefully her writing just improves from here.

2 Replies to “Danika reviews The World Unseen by Shamim Sarif”