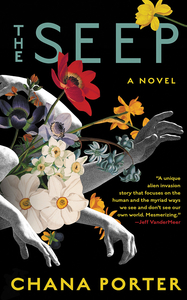 The Seep is a weird fiction novella (200 pages) exploring a “soft” alien invasion utopia. It begins with a section titled “Tips for Throwing a Dinner Party at the End of the World.” Earth is being invaded by a disembodied alien species–which turns out to be a good thing. The Seep forms a symbiotic relationship with humans. They get to experience linear time and human emotions, and in exchange, well, they solve basically every problem people have ever had. Illness, inequality, capitalism, pollution and climate change all disappear. People develop intense empathy for everyone and everything in the world. Everything and everyone is connected, anything imagined is possible, and everyone is immortal to boot.

A utopia may seem like a set up for a boring book: where’s the conflict? But although The Seep just wants everyone to be happy, it doesn’t understand human complexity and why we might like things that are bad for us. In fact, despite having every opportunity imaginable, Trina is miserable. She is grieving, and she’s tired of this new world: everyone is constantly emotionally processing and high on The Seep. She finds herself nostalgic for struggle and purpose. She’s trans, and after fighting for so long, she’s at home in her body and vaguely irritated at people who treat changing faces and growing wings as a whim.

Despite the big premise, the real story is about Trina’s journey through grief. Her relationship with her wife is over (I won’t spoil why), and no amount of The Seep wand-waving will fix it. This alien species of superior intellect, power, and empathy can’t grasp why she would choose to feel pain, to poison herself with alcohol, to neglect her home and relationships. This novella shows what being human really means, and how no world, no matter how idyllic, really can be without conflict–but that’s just part of the experience of being alive.

I loved how queer this is. From the beginning, Trina and Deeba are having a dinner party with two other queer couples. I liked the discussion of what race and gender and sex mean in a world where you can change your appearance effortlessly. Trina and Deeba are both racialized women. Trina is Jewish and indigenous, and other Jewish and racialized characters appear as side characters. I appreciated this focus, but I acknowledge that I am reading this from a white, non-Jewish, cis perspective, and although the author is bisexual, this is not as far as I know an own voices representation of any of the other marginalizations that Trina has. I would be interested to read reviews by trans, Jewish, and indigenous readers.

If you’re looking for a short, thoughtful, and weird read–definitely pick this up. I loved the writing and the characterizations (there are so few good bear characters in books, you know?), and I look forward to picking up anything this Chana Porter writes next!

2 Replies to “Danika reviews The Seep by Chana Porter”