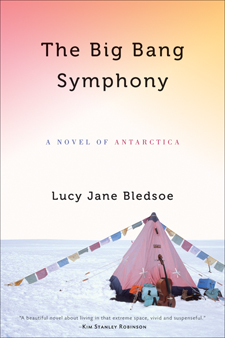 This was the third book I read in December that Queer Books Please categorized as part of the “Lesbians In Cold Places” genre, and it definitely fits there! The Big Bang Symphony is set in Antarctica, and the incredibly cold climate can be felt on every page. Only one of the three protagonists is a lesbian, though. All three women have travelled to work in Antarctica to push themselves to solve problems in their lives, to answer questions about themselves. Mikala (the queer character) is still grieving her partner, who died a year ago, and whom she was with since childhood. Rosie, who seems like the central character, maybe because we start the story with her, is adrift. She left home as a teenager and has been searching for it ever since, leading her to this furthest corner of the globe yet again. And finally, Alice, meanwhile, has come to Antarctica to finally leave home, to escape an overbearing mother and to perhaps find a new relationship.

This book is a slow build. The plot does not race along. Instead, the novel concentrates more on character development, and the way these three women’s lives intersect. The setting is fascinating, because it is extreme. It really creates this great parallel to these characters trying to “find themselves”, because in this climate you can literally die from standing still too long. And the characters and their arcs are all compelling. I loved Rosie’s brash, bold personality, though I found her romantic life in the book to be frustrating (but that was the point). Mikala and Alice take a little while to find their voices, because they are more subtle than Rosie. Mikala is juggling a lot of different things in her life, but one of them is her failure to find creative release. She is a composer, and she spends most of the book trying to break through the barriers to her creativity. Alice is a scientist, and she examined everything with exacting, unbiased logic, until she doesn’t. I feel like I should have found her romantic arc annoying, because it follows some tropes that I have hated in other stories, but I actually really enjoyed it. I thought it worked well for her.

Mostly, it’s the ending that really made this book for me. As I’ve said, it’s a slow build. I found most of the book a little difficult to get through, because it wasn’t a pageturner, it wasn’t making me desperate to know what happens next. But that unfolding of character development, the detailing of the different relationships all the characters end up having with each other, the subtle weaving in of their backstories, it all paid off. By the end of the book, I really felt for these characters. I was rooting for them. I actually was grinning to myself and laughed out loud near the end, because I was happy to see these characters get the resolutions they so desperately needed in their lives. If you’re up for a atmospheric, character-based story, I would definitely recommend The Big Bang Symphony. The writing is skillful and the characters are so believable. Curl up in a chair with a warm drink and settle in for a subtle, but satisfying, read.