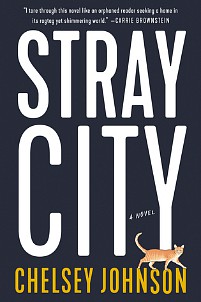 Wow. This was an emotional journey for me. The description promises this is warm and funny, and although it contains those things, I also found it uncomfortable and anxiety-inducing at times. I did really enjoy the story overall, and I think it had a satisfying payoff, but I do think there are some barriers to entry here.

Stray City begins in Portland in the 90s. 24-year-old Andy has found her family and community in the queer/punk/diy scene here. She came here for school, but after she came out, her Catholic Midwestern parents stopped footing the bill for tuition. Now she’s part of the activist group The Lesbian Mafia, hangs out with the lesbian band The Gold Stars, and does graphic design (mostly in the form of artsy/folksy wedding invitations) and works at an antique shop to pay the bills. She has been recently dumped, and when she sees her ex-girlfriend making out with one of Andy’s closest friends at a show, she’s grateful for any distraction she can get. That distraction comes from Ryan, a straight guy who plays drums in a local band. Andy likes talking to someone outside of her circle for once. His attention is simple. Uncomplicated. It still comes as a surprise to her, however, when in the alley out back after the show, she starts kissing him.

This is where I think Stray City will lose a lot of Lesbrary readers. This is, essentially, a story about a relationship between a lesbian and a straight guy. Unlike something like Ramona Blue, however, this isn’t about someone on a journey to a greater understanding about their orientation–or maybe it is, but it leads right back to where she started. This is something that I see a lot more in real life than I do in fiction: lesbians who have casual sex with men, even though they’re not attracted to them. Because it’s easier, or because they’re looking to get something out of sex that doesn’t require intense attraction or romantic attraction. For Andy, she’s clearly looking to be desired. She’s been hurt in her previous relationship, and it’s nice to be wanted. It even feels a little scandalous, at first, to be with a guy. And she does enjoy his company… she’s just not attracted to him.

Reading about Andrea and Ryan’s relationship made me cringe. I wanted to like Ryan, because I wanted to see what Andy saw in him, but there were definite warning signs: he really seems to see Andrea as a “challenge.” He destroys things when he’s angry. He gets itchy feet staying anywhere too long. Andy wants this uncomplicated connection with someone: an assurance of being wanted, both sexually and personally. She likes hanging out with him, playing Scrabble, talking all night. And making out is fun! But, of course, this gets very complicated. Ryan wants more from their relationship. Despite the open communication happening, despite Ryan knowing she’s a lesbian, he still holds out hope that she will fall as passionately in love with him as he is falling for her.

Andrea’s flirtation with going back into the closet is really interesting (if uncomfortable) to read about. She marvels at being able to go out (in a different town) and hold hands with him without anyone caring. Although she has kept this relationship from her friends, although it felt exciting and illicit there, she realizes that in the greater picture, it’s completely encouraged.

I feel like what follows is a spoiler, but it’s clearly outlined in the description, and it is the heart of the story, so I feel like it’s worth knowing about before you get into it!

Andrea has a powerful moment where she realizes that she is done faking anything for anyone, and she’s ready to let Ryan know exactly where they stand… and then she finds out she’s pregnant. She immediately makes an appointment with the women’s clinic to have an abortion, but now that the possibility is there, she can’t stop thinking about it. What would it be like to like to raise a kid in her found family? A kid surrounded by queer people? A kid who didn’t have to have the same rigid restrictions she had? Couldn’t that be something incredible?

Andy soon finds out, though, that some of her new, cool, queer circles have just as rigid demands as Catholocism, and being a pregnant lesbian doesn’t fit them. She has to face the judgement, and sometimes rejection, of her community. (As someone who came out as bisexual after IDing as a lesbian for a decade, I really felt this.) Meanwhile, her relationship with Ryan gets even more complicated and strained.

I thought this was a fascinating, thought-provoking and emotional story–even if it did make me want to crawl out of my own skin at times. I found it funny how nostalgic the beginning felt for me: I was not in the right decade or even country that Stray City describes, but that queer political/punk/diy/mid-20s scene has not changed much over time or distance. I also loved the descriptions of Bullet, Andy’s pitbull, and how she says that queers and pitbulls are in the same family.

I was surprised to find that the novel jumps ten years in the final third, but that section is such a breath of fresh air. All the tension built in the previous sections is released, and we get to see Andy where she really belongs, with the family that she has chosen.

I do recommend this one, but I know it’s not for everyone. Most of the book does deal with Andrea and Ryan in a sexual, semi-romantic relationship. On top of that, there is some biphobia–although I don’t think it’s endorsed by the narrative, Andy and her friends all scoff at the idea of being bisexual. If you can get through the discomfort in the middle of the narrative, I do think the pay off is worth it. I especially recommend the audiobook!