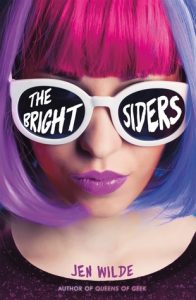 One Reply to “Danika reviews The Brightsiders by Jen Wilde”