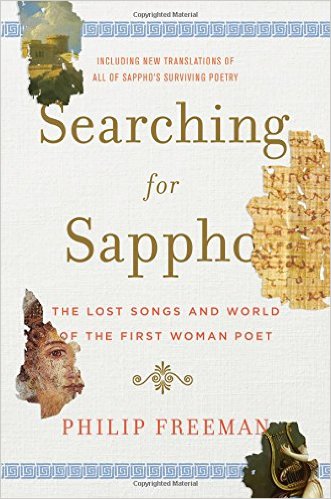 I always want to know more about Sappho, but perhaps that’s a doomed quest. No matter how many books I pick up about her, the truth is, we just don’t know very much. Searching for Sappho doesn’t claim to uncover anything previously unknown about Sappho, but it is a serviceable overview of what is established about her life.

It’s not surprising that a new book about Sappho came out in the last few years. A poem of hers was discovered for the first time in 2014, and from there the clock was ticking for a truly complete collection of her poetry to come out. Searching for Sappho fits this bill, but I couldn’t help the cynical conclusion that this was the only reason it was published. (Only about half of this book is a biography of Sappho: the rest is a collection of all of her poems discovered to date.)

This book sticks to the facts of Sappho’s life (as well as telling the story of the recent discoveries), but because those are so few and far between, they’re supplemented with general facts about life in ancient Greece. This did feel a little bit like padding, but at the same time, it was really enjoyable. I didn’t pick up Searching for Sappho as a general history book, but the tidbits about things like ancient Greek medical advice had me cringing and laughing.

I did also appreciate the undercurrent of feminism throughout this book, especially since–and this may be unfair of me–it was written by a guy. There is just a brief chapter on Sappho’s love of women, but the book focuses around the sexism women faced in this society, and discourages the reader from seeing even women Sappho feuded with as being sexist caricatures.

This isn’t a revolutionary take on Sappho, but what could be? The cold reality is, we have only scraps of information about her life, and this book is a fine overview of them. As for me, I think I’ll keep hunting for the stories we tell about Sappho, because I think that what we believed about her is just as interesting a story as they life she really led.