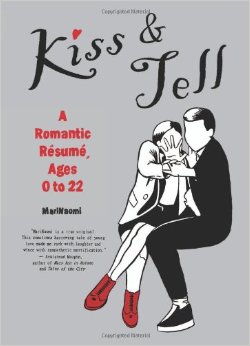 Right off the bat I have to let you know that this isn’t a lesbian book. MariNaomi seems to be attracted to more than one gender, but the vast majority of this book deal with her relationships with boys and men, with the occasional experiment with girls, though there are hints throughout the book that she accepts a queer identity later in her life.

Kiss & Tell is a graphic memoir that spans MariNaomi’s life from childhood to 22, with brief (usually only a page or two, sometimes a handful of pages) stories about each of her romantic interests, whether they lasted a day or years. The art style is similar to Marjane Satrapi’s in Persepolis, and the style and storytelling really grabbed me, even though each story is so brief. By following these romantic interests through the years, we get a sketchy look as her life in general, and it’s one that’s intriguing and occasionally melancholic. Although the art style is usually fairly basic, there are sequences that receive a lot of detail and are even more affecting for the contrast.

Although I’ll admit that I was expecting a little bit more queer content from this collection, I still ended up really enjoying it. This was a really quick read and totally engrossed me; I read it in two sittings. Despite the book chronicling dozens of characters, each was drawn distinctly enough that I never mixed them up, and the stories never felt repetitive. I’ll definitely be picking up more of her books in the future.

One Reply to “Danika reviews Kiss & Tell: A Romantic Resume, Ages 0 to 22 by MariNaomi”