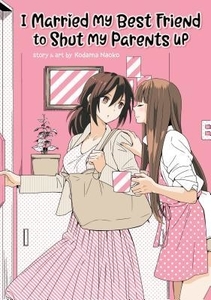 I know, I know. This seems pretty silly. I’ll admit that I sometimes pick up yuri manga as a guilty pleasure: most of the yuri I’ve read has been absorbing, but comes tainted without enough homophobia and male gaze to sour the reading experience. I’m happy to say that this book really surprised me.

This short, standalone manga is about a fake marriage: Morimoto is sick of being constantly set up by her parents. Her friend Hana suggests that they get married (or, at least, get an equivalent partnership certificate offered in some regions). Morimoto finds herself agreeing to this plan, despite her parents’ outrage and despite her knowledge that Hana is an out lesbian and had feelings for her in high school.

Another thing that I often find myself recoiling from in the manga I’ve read is an unhealthy attitude towards consent. In this story, Hana “playfully” pins Morimoto down, asking if she’s afraid of sleeping in the same room as a lesbian. Morimoto immediately goes limp and glassy-eyed, and Hana backs off, explaining that she was joking, and seemingly thrown by her reaction. This scene also explains how Morimoto got in this situation: we find out that her parents are controlling and emotionally abusive, not allowing her to make any real decisions in her life. She has been trained to follow along meekly in what is expected of her, which explains how Hana was so quick to convince Morimoto that she should be able to live in her apartment in exchange for housework.

Unsurprisingly, Hana and Morimoto’s relationship changes as they live together. Morimoto also finds new confidence in herself: she is inspired by Hana, by her dedication to her passion (art) and her defiance in being unapologetically out. It was gratifying to see an out character, one who even uses the word “lesbian,” in the pages of a yuri manga. [spoilers:] It was inspiring to see Morimoto stand up to her abusive and homophobic mother. [end spoilers]

This isn’t perfect, of course. Morimoto is drawn with fan service-y unrealistic breasts, and sometimes Hana pushes Morimoto (but always backs off). But it’s so refreshing to pick up a manga that really seems queer. It feels genuine. This has all of the appeal that yuri manga usually has for me: it’s a quick, absorbing, and adorable read. But it adds more depth and realism than I expect from this genre. It had me absolutely grinning as I read it. Be warned that the end of this volume is an unrelated short story, so it is pretty short. I loved this, despite the laughable title. I highly recommend it, whether you’re already a fan of yuri manga, or if you’re looking for a place to get started.