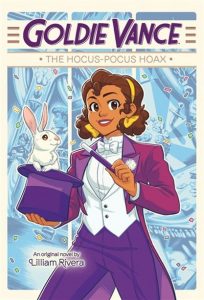 I already know and love the Goldie Vance comics, but now it is also a middle grade novel series! The premise is that Goldie Vance is a sixteen year old girl who works as a part-time valet, part-time detective at a resort her father manages. She is the assistant to the hotel’s detective–which is apparently a thing?–and aspires to be a full-time detective when she’s older.

It has a 1950s feel, and Goldie is the plucky heroine we expect from a girl detective, except this one is a queer girl of colour! I love the comics, so I had to see how the novel versions compare. Although the main character is 16, she appears to be a little younger, which I think matches the 1950s aesthetic and definitely makes this work as a middle grade novel. When I worked in the children’s department of my local bookstore, I often wished there were more middle grade and YA mysteries–they are very popular for around 6-8 year olds and then inexplicably disappear–so I’m glad to see this will help fill that niche.

I was a bit worried about whether the queer relationship would be included in this middle grade version of the story–the comics are all-ages, but could easily be read by teens as well. Happily, it’s actually a big part of the plot in this volume.

A conference of magicians is happening in the hotel, and the stakes are high. The intimidating owner is demanding everything goes smoothly, because if this because a repeat event, it will be very profitable. Unfortunately, three of the waiters get food poisoning, and Goldie and a few of her friends at the hotel have to fill in. Meanwhile, Goldie is trying to plan the perfect first date with Diane. Unfortunately, she’s forced to be a server that night and has to cancel, and when they reschedule, the restaurant has been reserved for a special event. Goldie invites Diane to come to some of the magician performances happening at the hotel, which she happily accepts. But that’s not the end of her first date complications: someone is sabotaging the magicians’ performances, and she has to figure out the culprit–all while the son of the celebrity magician keeps following her around and telling her how to better do her job.

Was I proud of myself for keeping up with a middle grade mystery’s clues? Yes. I’m not usually a mystery reader because I am terrible at keeping track of details, so apparently middle grade mysteries are my level. I won’t comment on the mystery structure itself, because it seems silly to critique whether a mystery for 10 year olds is sufficiently complex for a reader triple that age, but this was an entertaining read full of memorable characters.

This finishes with a short comic at the end, which was a fun surprise. We see Goldie and Diane finally get to have their date together, and it’s adorable. I do think this translates well in the novel format, and I hope the series is long-running. This is technically the second book in the series, not counting the comics, but you don’t need to have read any of the other Goldie Vance books before this one: it’s a self-contained story.