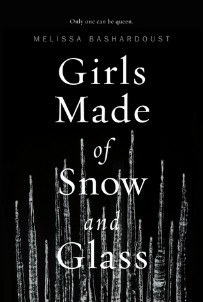 This is a fairy tale about misogyny. About the men who pit women against each other, and force them into limited roles. And the relationships that form between these women regardless. The love that they share even when told they should they should hate each other. The revolutionary power of love and forgiveness to break apart these narratives and allow for a new beginning. Ostensibly, this is a retelling of Snow White, but while it uses touchstones from that story, it isn’t restricted by it.

Mina is a girl who’s been raised her whole life to replace her dead mother. Her father fawns over her similarities to his late wife, but Mina is uncomfortable being shaped into the mirror image of someone she’s never known. She wants the chance to be her own person.

The story alternates between her story and Lynet’s backstory–Mina’s stepmother and the only mother figure she’s ever known. Mina adores Lynet, but Lynet has a more complicated relationship with her. The only value she can see in her own life is her position as queen, and Mina is a threat to that. We get to see how Lynet was groomed into this “Evil Queen” role by her father, who is manipulative and unkind and uses his daughter to gain power. She uses everything at her disposal to escape her father, but she’s told that the only value she has is her beauty. No one will ever love her for anything else. (Those are the words from her father that continually echo in her mind.)

I loved that Girls Made of Snow and Glass took this fairy tale trope of the “Evil Queen”/”Evil Stepmother” and did a deep dive into imagining what could lead someone to feel like that was their only option. Why would someone act so unfeeling? Why would she be so cutthroat in her pursuit of the crown? Lynet can be ruthless, but she’s sympathetic. She’s been told her whole life that she is unlovable, that the only value she has is in her appearance. The only way out of that she can see is to become queen and be loved by her subjects. And if she has to scheme her way there, well, that’s what’s necessary.

The complex relationship that Lynet and Mina share is the central tension of the story. They are constantly pitted against each other, but they’re reluctant to follow through. Lynet has been told by her husband not to get too close to Mina (no one can replace her real mother!) but Mina has grown up with her. She’s the one who finger-combs Mina’s hair every night to gently release the tangles. She’s the person that Mina feels loves her for who she is.

There is, of course, an F/F romance in here as well. Nadia is the court surgeon, and Mina is immediately drawn to her. To be honest, I don’t feel like I can comment on this storyline without spoiling anything, so I’ll just say that I think it complemented the other narrative threads well. All three women are trying to create the most promising futures they can with the circumstances available to them, but they’re hemmed in by the expectations and limitations placed on them by the men in their lives. When they seem to have found a loophole, they’re somehow pulled back and forced to make the choice to hurt the people they love or hurt themselves. It feels so inevitable and tense that you can only anticipate that final moment, where they seem to have no option but to fall into the roles provided for them. But despite what they’ve been raised to believe, despite the hurts that they inflict on each other because of this, despite the mistrust and skepticism and pessimism, they still find a way to reach out–however briefly–and find connections with each other. And the bonds they form, the love that develops even then, creates the shimmer of other possibilities for them.