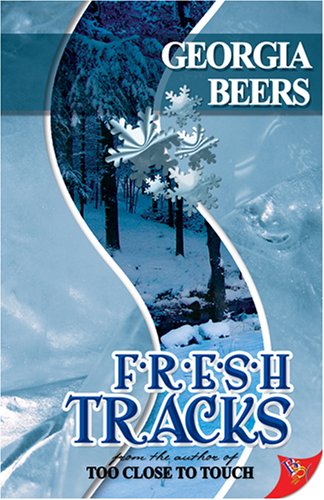 At the end of November, when I was planning the books I’d like to pick up in December, I took a look at my shelves to see if there were any holiday or wintery books I hadn’t read yet, and Fresh Tracks immediately jumped out at me, so I knew it was a must-read for the month. I’m glad that I took that look, because this was a great December read. It takes place just after Christmas and into the new year, so it’s… holiday-adjacent, without being a blatant Christmas book. Fresh Tracks is about seven lesbians who get together in a cabin in the woods for a vacation, and lesbian drama, of course, ensues.

I ended up liking this book a lot more than I was expecting. I thought it would be a quick, fluffy romance book, but I ended up really enjoying the characters. Even though there are seven main characters, they are distinct and easy to keep track of. There are Jo and Amy, the lesbian couple who have been married for fifteen years and are still adorably madly in love, who act almost in a nurturing, parental role over their friends; Molly and Kristin, who have also been together for a while, but their relationship is falling apart due to Molly’s passive-agressiveness and Kristin’s workaholic tendencies; Sophie, who is recovering from a devastating break-up; Laura, who realized she was gay after she married a man, then got together with a woman and left him, only to have the other woman leave her; and Darby, Jo and Amy’s smartass niece who is terrified of commitment but happy to seduce any woman standing next to her.

Phew! Just describing them makes it seem like there are a lot of characters, but they really are easy to keep track of, and even though the narrative rotates between them, I never got annoyed by that. I’m often losing track of names of characters, so that’s a pretty good sign. Plus, they are all different ages (Amy and Jo are the oldest, Darby is the youngest, and everyone else is somewhere in between) and have different personalities and voices (which should be a given, but sadly isn’t always). There even is, shocker, a lesbian of colour (Sophie). They also sort of end up in pairs or groups: Amy and Jo act as a unit, Molly and Kristin push and pull against each other, Sophie and Laura bicker (because Sophie sees Laura as a cheater, and Sophie’s ex-girlfriend left her for another woman), and Darby bounces between Molly and Jo in character interactions.

Understandably, with seven lesbians in one small space, there is lesbian drama, but the drama is entirely realistic, and entertaining. (Though I did think Sophie was a little over-the-top in her resentment of Laura, but that’s still believable.) I started narrating what was happening to my roommate: “Darby, what are you doing?” There is definitely enough tension to keep in interesting, but not enough to make it uncomfortable. And each character has their own arc in the story, perhaps excepting Jo and Amy, because their lives were pretty great when they started. The plot manages to balance all of those storylines really well, while playing characters off each other. I was really enjoying it, with my only real complaint being the “Your generation” comments that some of the characters made (“Your generation, with your cell phones, and your internet, and your lack of social skills”), with Darby kind of reinforcing those ideas…? And then there was one detail near the end that unfortunately really affected my enjoyment of the story as a whole. To express it in a non-spoiler way, there was an event that I don’t think was properly dealt with and addressed. Specifically: [spoilers, highlight to read] Molly makes out with Darby, and never tells Kristin, even though Molly and Kristin are back together at the end and working on their relationship. It’s not addressed at all that they kissed. [end spoilers] That felt like a really huge loose end, and I was surprised that it wasn’t dealt with at all. It made the ending not feel like a complete resolution, even though everything else was addressed. I still liked it a lot, but sadly that one detail makes it not feel like one I’ll want to re-read. It’s still one I would recommend, though, especially as a lesbian winter read. Also, there’s a lesbian Christmas tree. I enjoyed that.