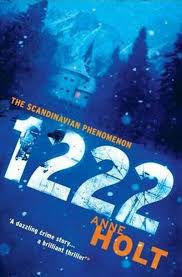 When I first saw this book mentioned on Queer Books Please’s list Lesbians In Cold Places: A New Genre, I was already super enthusiastic about the list itself. I like seasonal reads (hence my October binge on horror), and combine that with lesbian main characters? Sold! Then I read the description of 1222 and found that it fulfills one of my favourite tropes: the Closed Circle. And it was compared to And Then There Were None by Agatha Christie, which I read last month and enjoyed. So an And Then There Were None-esque story about people snowed into a creepy hotel, with a lesbian main character who is in a wheelchair? You could not have hooked me any more than you already have. And maybe that build-up was the problem, because I did not enjoy this one nearly as much as I was expecting.

For one thing, this is a mystery, but it is not similar to And Then There Were None. There are more than a hundred people in the hotel, and to avoid spoilers, let’s just say it’s not as if a large percentage of those people end up dead. Also, they are only stranded for a few days, so the stakes weren’t as high as I was expecting. And then there’s the main character, Hanne, who is utterly unlikeable. I enjoy flawed characters, so I don’t need main characters to be likeable in order to appreciate the read–I found the main character in the Red Tree delightfully causter–but Hanne is a complete misanthrope. She looks down on other people. The line that made me recoil is when she is describing her housekeeper: “But I’m not fond of Mary. She is simply there, like a human piece of furniture, and I have learned to live under the same roof as her. That’s enough for me: Nefis, Ida, and a tired, dried-up whore who cooks our meals.” Later she calls a little person a “dwarf” and continually describes him as looking absurd and clownish, even when she begins to like him. She calls all religion a “scourge”. And on a slightly different note, there is pitbull hate in this book, which I don’t appreciate. And, [spoilers, highlight to read] there are only three people of colour in this book, all minor characters, who all end up being revealed to be carrying concealed weapons. [end spoilers]

I also realized that this is actually book eight of the Hanne Wilhelmsen series, but 1222 did a good job of filling me in on the basics of her backstory so that I didn’t actually feel like I was missing anything. The action starts off strong: the book begins with the train Hanne is on crashing. Unfortunately, I did feel like the rest of the book was a little bit slow. I found the characters difficult to keep track of, because most of them I just didn’t care about. To be fair, I didn’t see the resolution of the mystery coming, and it did all make sense, but I wasn’t invested. (Also, the very end was… a little outdated now.) Overall, I can recognize the writing quality itself was good, but without being interested in the plot or the characters, I didn’t find it to be very compelling. I’ll admit that I haven’t read a ton of mysteries, so that may affect my outlook, and other book blogs seem to give 1222 a high rating. Maybe a mystery buff who likes anti-heroes would enjoy this one, but I would recommending passing on this Lesbians In Cold Places read.