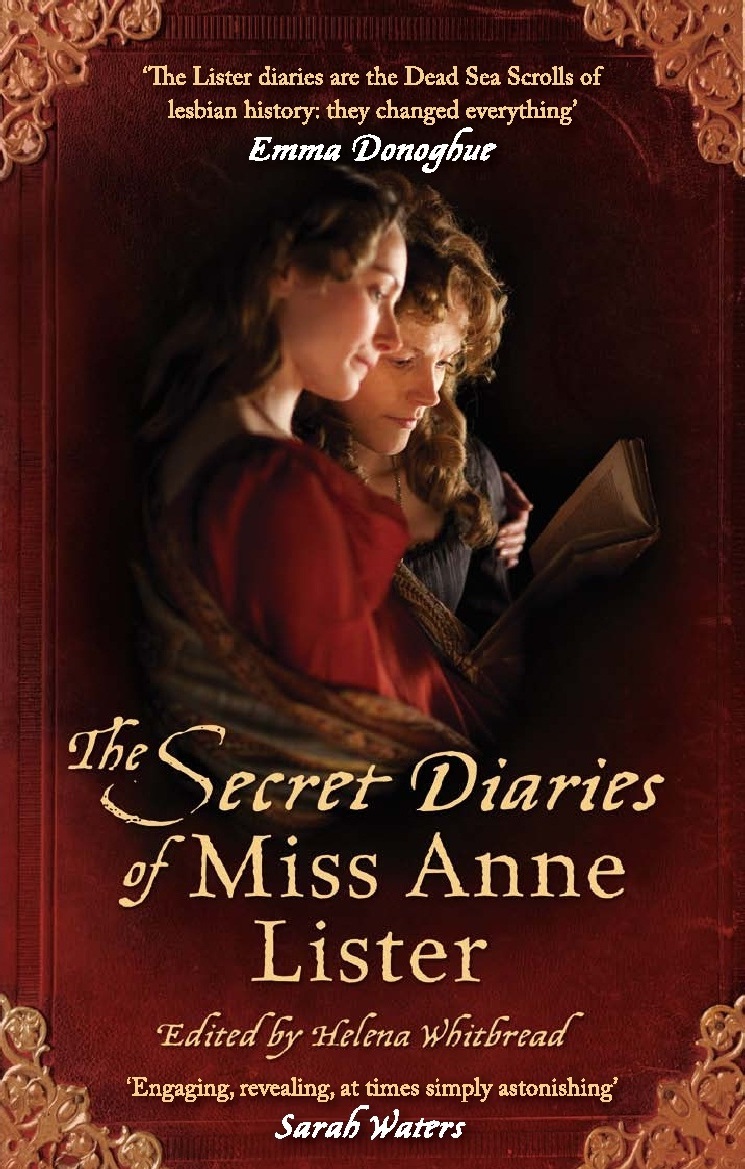 I Know My Own Heart: The Diaries of Anne Lister 1791-1840, edited by Helena Whitbread

The Diaries of Anne Lister is definitely the oldest “lesbian” book I’ve read to date.  I’m putting lesbian in quotation marks because what is actually the most fascinating things about the diary is how Anne Lister explores her attraction to women and her sexual identity in a time before sexuality was such a defining characteristic for our identities and before the word lesbian even existed with our contemporary understanding of it (if anyone as nerdy as me is wondering, “lesbian” was first used in 1890 as “female homosexual,” according to the Oxford English Dictionary—so it’s really a relatively new word!).  Back to Anne Lister: she was an upper-class Englishwoman living in Halifax and Shibden Hall, West Yorkshire in the early 1800s who kept a very comprehensive diary of her life, a significant amount of which was written in a code that Lister herself had created.  This diary was discovered in the early 20th century by John Lister, the last inhabitant of Shibden Hall; he was advised to burn the diaries when the code was cracked—isn’t this a great lesbian detective story?  Fortunately he didn’t (thanks John, for saving an incredible piece of lesbian herstory!) and historian Helena Whitbread has published two editions of Lister’s diaries—the first one in 1988, the version that I’ve picked up.

What is often strange and amusing about this diary is how Lister will list off banal details of her life, such as that she had “most excellent ¼ hind lamb, cold, potatoes & kidney beans” for supper and calculated her finances with a balance of “ninety pounds, twelve shillings, & twopence three farthings,” alongside shockingly matter-of-fact statements about her sexual and romantic relationships with women.  If you picked this book up somehow not knowing, you might miss Lister’s astonishing assertion “I love, & only love, the fairer sex & thus beloved by them in turn, my heart revolts from any other love than theirs.”  Having declared her sexual identity, Lister meets another masculine queer woman, Miss Pickford, and wonders “Are there more Miss Pickfords in the world than I have ever thought of?”  She discovers, in other words, that she is not alone in her sexuality and comes to terms with herself as different, but “natural.”  She tries to deal with her lover Marianne’s internalized homophobia.  She flirts with neighbourhood women.  Actually, Lister is kind of a dog; she juggles a few women at once throughout her diary, and writes of one woman that “She looked very pretty … She seems innocent & unknowing as to the ways of the world.  I wonder if I can ever, or shall ever, mould her to my purpose.”  Oh my, to what purpose is that, Anne?

Another fascinating issue in the book is Lister’s gender.  In fact, I began to wonder the farther I read into the diary if she might identify as a trans man if she were alive today.  She often, for example, is read as a man in public and is uncomfortable with women’s clothing.  She writes shockingly at one point: “Foolish fancying about Caroline Greenwood, meeting her on Skircoat Moor, taking her into a shed there is there & being connected with her.  Supposing myself in men’s clothes & having a penis, tho’ nothing more.”  What does she mean by this?  Why is Marianne’s pet name for Lister “Fred” in their letters?  Would Lister have preferred to pass as a man?  Or was conceptualizing herself as Marianne’s “husband” the only way she had of expressing her desire for a female partner?  The diary doesn’t answer these questions, obviously, but they are interesting ones to keep in mind while reading it.

If you can take Lister’s classist, snobbish qualities in historical context—her attempts at social climbing and her insulting the “vulgarity” of those socially beneath her are pretty awful—the diary is quite a fun read.  I found the contrast between the old proper British English and some of the raunchy details—Lister in bed with different women, Lister attempting to cure her venereal disease—hilarious.  The other element of the book that I really enjoyed was the unlikely feeling of kinship I felt with Lister despite the huge differences between us.  I came away from the diary with the sense that dyke or queer lives today are in some ways not so different than Lister’s.  For example, she records a visit to the Ladies of Llangollen, a known lesbian couple, wanting to find a kind of role model for herself and an eventual partner—so even in 1822 all the dykes knew each other! Lister’s declaration of her love for the “fair sex” echoes contemporary coming out and coming of age stories.  Her struggles with gender identity, homophobia, relationships, intimacy, and sex are definitely of her own time, but reading about them in Lister’s own voice really made them resonate for my time.