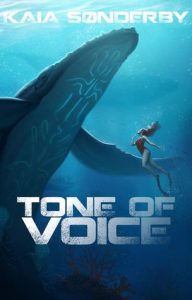 “Things on the inside get easy to see,” Xandri murmured, snuggling contentedly between us, “when you’re always on the outside.”

Back in March, I finally read Failure to Communicate, a book that was recommended to me as #ownvoices autistic representation by an indie author. I wasn’t aware before reading the book that other than being autistic, the main character, Xandri, is also bisexual and possibly polyamorous, with one male (Diver) and one female (Kiri) potential LI in the first book. The series also deals with some heavy issues, such as ableism in society, and parental abuse in the main character’s backstory.

I adored the characters and the worldbuilding of Failure to Communicate so much that I immediately rushed to pick up its prequel, Testing Pandora, which takes place a few years earlier. So, obviously, when the second book in the series, Tone of Voice, came out earlier this month, I had to pick it up immediately.

A quick, mostly spoiler-free recap of the first book for those who are not familiar with the series: Xandri is a member of a xeno-liasons team on a spaceship called Carpathia, a ship responsible for several successful first contacts with many alien species. Since Xandri is autistic, she had to learn many social clues that came naturally to allistic people, and this constant attention to body language and such actually makes her the best at reading and contacting with new alien species. In the first book, Xandri negotiated an alliance with a notoriously xenophobic species, the Anmerilli, but due to some circumstances she was (frankly, unfairly) forced to leave the Carpathia. The second book picks up a few months later.

Tone of Voice starts with a quick guide to the various alien species present in the books, which was a pretty useful refresher. The species we get to know closely in this book are the Hands and Voices–a symbiotic species where one whale-like alien (a Voice) lives together with several octopus-like creatures (the Hands), which is, of course, a huge oversimplification. I absolutely love the way Kaia handles alien species in these books. While they are usually compared to some Earth animal or concept so that people can more easily imagine them, the alien species are all distinct. What’s more, even within the species there is diversity, different sub-species, and different groups or cultures.

It was great to return to Xandri’s mind and narration. She remains a complex and wonderful protagonist, with quirks and flaws and impulsive decisions, but many more lovable qualities. Xandri is a pacifist at heart: despite not always understanding them, she loves people and she loves all alien species, and she doesn’t want to kill anyone. She feels sorry for those who die, even if it happens in self-defense. And yet, I loved how it was addressed that violence is sometimes necessary, and that violence from oppressors and violence from the oppressed groups defending themselves will never be equally bad: “For once, the voice at the back of my mind had all the sense. If their worst nightmare is the people they want to oppress and kill fighting back against them, then they are the ones with the problem.”

A big change this book brought was the multiple POVs. While the first book was entirely from Xandri’s point of view, in Tone of Voice, the narration kept switching between Xandri and her best friend and love interest, Diver. This was great for several reasons, one of them being that it allowed the reader to see the events happening in two places at once – which was pretty useful when there was a lot happening. I felt like the stakes were raised much higher in this book: as we can already see in the blurb, Tone of Voice has two armies with clashing with each other instead in the second half instead of small groups fighting like last time. That also means several deaths in the side cast that sometimes caught me off guard, but it also meant many, many tense moments where I was eager to keep on reading and see what happens.

There is little time for romance when you are trying to first negotiate with an unknown alien species, and later fighting a war to protect their planet from anti-alien racists, which means that Xandri’s romantic relationships progress pretty slowly, but they’re still there. In the first book, Xandri had a clear interest in both Diver and Kiri, and it was stated that Kiri was polyamorous and preferred triads. In this second book, I still believe that a triad between the three of them is where the series is heading, but while there is still a significant focus on Xandri’s relationship with Diver, I often found myself wishing we’d see much more of Kiri.

This book also introduced a nonbinary side character with vi/vir/virself pronouns. I am always happy to see more nonbinary characters, especially once that use “unusual” pronouns, so Jae was a nice surprise.

There is no info about the third book yet, but there’s a lot to look forward to. The ending of Tone of Voice gives the reader some clues on what the main plot is going to be, and I’m also curious if we find out more about Xandri’s past.