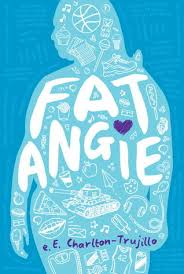 When I initially picked up Fat Angie, I was put off by the language. At first, I thought it was outdated slang, cringingly unrealistic. As I kept reading though, I realized that it wasn’t dated, because I don’t think anyone has ever spoken like that. Instead, it has more in common with buffyisms–a kind of fictional teen speak that somehow represents teen slang without reproducing it. It makes sense, since BtVS is mentioned several times. As I kept reading, I got acclimatized to the language, though it definitely adds a distinct flavour to the text.

[trigger warning: discussion of harassment, hatred, emotional abuse, cutting, suicide] This is not a light read. Yes, the main character is referred to as “Fat Angie” the entire time. And body image is a part of what she deals with, but that doesn’t begin to scratch the surface. Angie faces hatred and harassment from all sides, constantly. She is relentlessly mocked at school, sometimes also being shoved or physically bullied. Her sister was a solider in Iraq who was captured, and her hostage situation was televised. She has been missing for many months, and everyone except Angie thinks she’s dead. Unable to deal with the grief, Angie cut her wrists with the intention of killing herself. She ran out in this state during a school assembly. She is targeted for being “crazy” as well as being fat. At home, things are no better. Her brother regularly levels the worst insults and harassment at her. Her mother is negligent at best and often emotionally abusive as well. She says, “No one is ever going to love you if you stay fat.” Angie’s therapist is a font of judgement. There seems to be no break from the hell that is Angie’s life. [A note during this trigger paragraph: Angie does lose weight during the book. She doesn’t end skinny, and it doesn’t really solve her problems, but it is seen as a positive, to do be prepared if that’s triggering for you.] [end trigger warnings]

The only bright spot is when a new, cool, rebel-type girl–KC Valentine–transfers into their school and befriends Angie. She doesn’t seem to mind that Angie is hated by the rest of the school, or that she’s anxious and awkward. To Angie’s surprise, their friendship develops into a romance. But they are in a conservative town, and Angie doesn’t know if she can handle the backlash she’d get for being openly “gay-girl gay” on top of everything else dragging her down.

To be honest, I found this a little bit exhausting to read. Angie is so isolated, and she faces a wall of relentless harassment. There are small moments of connection and support–the gym teacher, Jake (Angie’s neighbour)–but they are muted and far between. Even the romance isn’t an entirely happy one. I wasn’t expecting this to be fluffy, but it far exceeded how dark I was prepared for it to be. I will be picking up the sequel as well, but I will cross my fingers that there’s a little more hope mixed in with the despair in that one.

One Reply to “Danika reviews Fat Angie by e.E. Charlton-Trujillo”