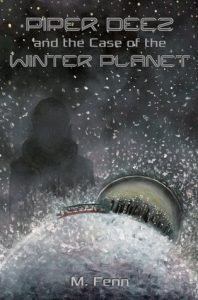 Piper Deez and the Case of the Winter Planet is a hardboiled scifi mystery by M. Fenn; Piper Deez is sent to investigate thefts on a mining planet owned by the clan that she serves, where there are definitely no factions, no bubbling undercurrents of resentment, and only a few murders.

Hello, I don’t know if I’ve mentioned this before, lesbian detective fiction is where I live. Piper Deez and the Case of the Winter Planet was always going to be my jam.

The world building is quite cool, and has some interesting imagery – I felt a bit blinded with science at first, but once the story finds its stride it’s easier to enjoy the imagery of a tiny town huddling beneath a permanent ice storm and unpick the politics at play. I also find it a cool distinction in the world building that there is a specific difference between being married and being monogamous, as the default appears to be polyamory in this setting.

Plus, I did like that it tried to talk about class privilege in this universe – there are multiple clans, which have a definite hierarchy, and I enjoyed the discussions of smaller clans unionising to gain more bargaining power. Making Piper Deez a member of a more prestigious clan is an interesting choice however, as it gives her more privilege (and ability to get her job done, or protect people) than I expected from a hardboiled investigator. It does engage with it a little, but it mostly seems to be “Piper hates using the power of her clan but does when it would help her,” which is appropriate for the setting… And kinda nice to see for a queer woman of colour, actually. (And yes, people without clans are treated exactly as well as you expect from all this.)

I found this to be part of the interesting spins on the hardboiled detective tropes – Piper Deez is a newly-wed who is very upfront that she used to be into casual sex before she got married, but is now monogamous, and she actually (tries to) stick to that even in the face of the classic femme fatale, which is honestly more than I expected of a pulp detective. (Her wife doesn’t show up in the story, but is mentioned a lot and with genuine fondness.) And as I said, she’s not only gainfully employed, but she’s actually coming into this story from a position of (relative) privilege, which is fascinating.

The mystery itself is a lot of fun, and it was honestly nice to see a story where the protagonist did reach out to others for help and received it without immediate betrayal. There were aspects that didn’t feel quite built up enough, but they were close enough to genre conventions that I could roll with it – police corruption and harassment are a staple of the genre, so the scenes of look closer, not everything is as it seems weren’t exactly a surprise. On the other hand, the last third felt quite rushed in terms of reveals, consequences, and how the actual ending went down; I had my suspicions about who was behind everything but even with that I was left going “Wait, no, slow down, shouldn’t you talk to someone about this reveal —?”

But it worked! Piper Deez and the Case of the Winter Planet was a short and pulpy mystery, and while the ending didn’t quite gel together for me, I really enjoyed it rolling familiar tropes into a sci fi setting.

This review was based on a copy provided by the author.