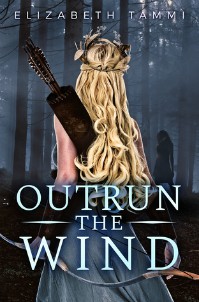 Outrun the Wind has been on my list of most anticipated releases ever since I saw that magical cover, and learned that it is a Greek mythology love story between two complicated young women. I love reading stories based on Greek mythology, but most of the ones I’ve read recently were modern retellings, so I was glad to read a more classical one.

This book did not disappoint. Outrun the Wind pulled me in from the beginning with the writing style, the story and the characters. The warrior-turned-princess, and the huntress with the prophetic gifts. And, of course, the gods, who somehow managed to be even bigger jerks than I expected. I wasn’t familiar with Atalanta’s myth before, but that didn’t stop me from enjoying this book at all – while it has elements from the canon myths, it also adds several new characters and fills Atalanta’s life with people.

I loved that this story was about two young women who were both hurt by men, but they managed to stay strong, get revenge, and heal together. Of course, nothing comes easily – their relationship develops gradually from animosity to love, so if you’re into that kind of thing, you might love this book.

One thing that was really strange to me is Artemis’s behaviour at the very beginning of the book, that Atalanta herself points out. You would think that a maiden goddess who renounced men and has a group of female warriors helping her would respect female warriors more and wouldn’t see them as subordinate to their male companions. I had minor issues with Apollo’s character as well, but those are more subjective (and possibly due to me still being under the effect of The Trials of Apollo) – however, this bit with Artemis just simply didn’t make much sense to me. I also would have loved to see more gods or Greek mythical figures maybe.

All in all, I thought this book was great for a debut novel, and while it could have used some more polishing, I definitely recommend it to anyone who likes Greek myths, or just fantasy with sapphic characters. (Also, I squeed when the title of the book was mentioned.)