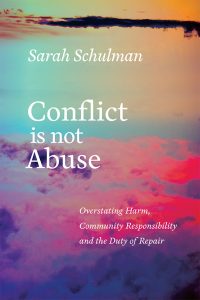 “The fact that something could go wrong does not mean that we are in danger. It means that we are alive.”

– Conflict is Not Abuse by Sarah Schulman

Just days after the American midterm election, it’s impossible to avoid the ever-growing polarization in the U.S. Author, playwright, and professor Sarah Schulman takes a new look at similar dynamics in her 2016 book, Conflict is Not Abuse, and posits that improving social ills requires differentiating conflict from abuse and responding differently. The ideas in the book are unique, persuasive, and practical, a great contribution to the peace movement. Everyone in a leadership position should read this book and strongly consider how they can implement its ideas to avoid escalation and crisis in conflict situations; it could literally help save lives and at the same time enable human beings to evolve and live with far less anxiety and fear and far more joy and peace.

Schulman draws on many sources for the book, including the theories and practices of psychologists, sociologists, novelists and poets. She is transparent about speaking from a queer and feminist perspective, and her methodology is more conversational and interactive than academic, making the ideas very accessible. She includes conversations with experts, quotes, tweets, Facebook posts, and concrete examples, including the Israeli occupation of Palestine, women in dangerous relationships, Canadian criminalization of people with HIV, and the killing of black men in the US by police. She does a great job of bringing many different thinkers and their ideas to the table, strengthening her argument and making the book all the more engaging.

The phenomenon of “overstating harm” is central to Schulman’s thesis. She says there is a very real difference between a woman who is afraid to go home because her boyfriend may kill her, based on past serious physical abuse, and a woman who is afraid to go home because she doesn’t want to face her boyfriend’s anger. People who have been in the victim role can overstate harm but so can people or institutions who actually have power. One example is the Israeli government’s treatment of Palestinians. Actions like a Palestinian protest over land being seized has resulted in ongoing killing of thousands of Palestinian civilians. Because of the Holocaust, the Israeli government overstates the harm of Palestinian actions; the overstatement of harm justifies the escalation and the ongoing oppression and killing of people whose actions were reasonable to their situation and in a far less powerful position.

Overstating harm happens from distorted thinking, Schulman explains, which has two very different root causes. Somebody with supremacist ideology can easily overstate harm. A supremacist is somebody who bullies, who doesn’t self-reflect or apologize, who believes he or she is simply better than others. These are the people who rape, abuse, cover up, lie, and cause scandals. But somebody who’s been traumatized by that person can have the same distorted thinking, by projecting the traumatizing event onto a current situation.

This was a powerful thought, that some of those who feel unsafe, threatened, or victimized are suffering from exaggerated thinking which contributes to escalation. It’s certainly not part of the politics of oppression. Many on the left in North America would label this “blaming the victim.” But a huge strength of this book is Schulman’s willingness to take risks like this to point out unpopular truths and perspectives to her audience, people on the political left.

Overstating harm also means that authentic danger becomes invisible. If a police department gets repeated calls about domestic violence when the perceived danger is exaggerated, the officers are far less likely to believe there is a serious problem when it happens. Those most affected, says Schulman, are the most vulnerable among us, like refugees, people of color, and disabled people. This is an important point as it shows how a personal habit or behavior can have a high and unwanted social cost.

Schulman also argues that the technological age has made this problem substantially worse. Electronic communication lacks the tools necessary to understand and connect with another person. Most of us have experienced offending someone with a Facebook post, a Tweet, an email, or a text message. Many people on Facebook have blocked somebody or have been de-friended because of a conflict that Schulman says could have been resolved had the people been in the same room. She advocates for picking up the phone and speaking voice-to-voice instead of texting or emailing, both to simplify and humanize communication and also to avoid the real dangers of miscommunication and escalation.

Another key element of the theory is that of the “bad group” or bad family that encourages the person or group to take escalating actions, like shunning, cruelty, and unilateral control. This is similar to peer pressure, something most of us have experienced. Schulman again is speaking not from a progressive or marginalized perspective but something more distanced, seeing the way the dynamic involves everyone and how escalation leads to crises nobody wants. The left often employs those tactics, and it’s valuable to question them when people around us “support” us by suggesting we use them.

Schulman gives a great example from her own life: a favorite male writing student posted a blog about having a crush on her in the early days of blogging. Her friends, most of whom are queer feminists, encouraged her to kick the student out of her class, report the incident to the police, and file for a restraining order. She resisted the pressure and instead took different steps. She asked the university to move the student to another writing class. She called and asked him if they could meet to talk. They got together several times and both learned more about the other’s position. Schulman ends the story saying she and the student have remained friends and fans of one another’s work; both emerged from the conflict feeling complete and understanding more about one another, themselves, and how to talk through a conflict.

Schulman suggests that “good” families and communities get involved in conflicts to help avoid overstatement of harm and distorted thinking. This was, perhaps, one of the most radical ideas if the book, in an age where most people consider conflicts personal and “nobody’s business.” We’re encouraged to involve either the state (certainly people of color know this will rarely have a good ending, but Schulman helps us see that it doesn’t help any of us in the end) or a private therapist if we’re wealthy enough to afford one. But our friends and sometimes our family members are with us in our everyday life. They know us better than anyone; if they can point out distorted thinking and help us prevent escalation, this could be a very easy and efficient way to avoid crises.

One particularly powerful chapter in the book is a series of tweets posted by Schulman and her friends, many of them Palestinian human rights activists, during the summer of 2014 when the Israeli army killed more than 2,000 Palestinian civilians. The realities of the situation as it unfolded were horrific to read about, particularly since no mainstream media outlet in the West reported what was happening. When contextualized, it becomes clear that the distorted thinking Schulman talks about can so easily lead to atrocities in which losses are enormous and nobody wins.

Human conflict exists because of difference. But we are far more capable of resolving it than we think. We must start by abandoning the roles of “perpetrator” and “victim” in circumstances that don’t warrant those labels. When we recognize that we are simply “conflicted,” we see the “other” as a human being, and it’s more likely we can find a satisfactory conclusion and often learn and grow. This new way of approaching conflict can result in paradigm shifts, which means social and cultural change, something most would agree is massively needed across the globe at this precarious moment in history.

Gail Marlene Schwartz is an Abba fan, a Planet Earth activist, and the first in her family to heal anxiety through diet, exercise, and Facebook rants. Favorite lit mag credits: Lilith Magazine, The New Quarterly, Room Magazine. Favorite anthologies she’s been published in: Swelling with Pride (Caitlyn Press), Nature’s Healing Spirit (Sowing Creek Press), and How To Expect What You’re Not Expecting (TouchWood Editions). Gail lives in southern Quebec where she and her wife homeschool their son. She is currently working on her first novel. www.gailmarleneschwartz.com.