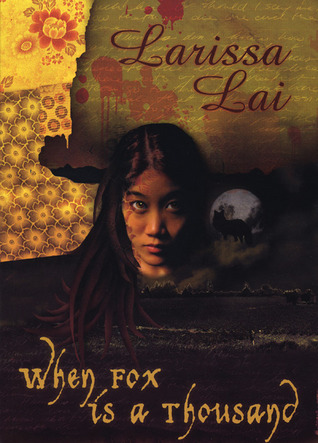 First things first, don’t read the back cover of When Fox Is a Thousand. At least not on the 2004 reprint by Arsenal Pulp Press. The plot points it describes don’t come into play until near the end of the book.

This is a slow burn of a read. It’s beautifully done: it’s told through three alternating viewpoints, all indicated by a symbol in the beginning of each section. One is the story of the fox, who is nearing her thousandth birthday, which will bring her greater powers and knowledge than she has known in her long lifetime. Sparsely scattered through the book is the story of Yu Hsuan-Chi, a real-life poetess from ninth-century China. Lastly is Artemis’s story, a young woman in modern-day Vancouver.

When Fox Is a Thousand is told like folklore. Even Artemis’s story, which is primarily about struggling with relationships of all kinds as a twenty-something while dealing with sexism and racism, has an undercurrent of magic and the surreal. The narrative keeps creeping forward, but embedded are many short fable-like stories, inspired by Chinese mythology.

Each narrator sets a different tone in her story. I was most intrigued by Yu Hsuan-Chi’s story, who falls for a woman during the T’ang dynasty, and that without even realizing until the afterword that she was inspired by a real person. I picked up this book unsure if it actually had queer women content or not, and was surprised to find that each of the three narrators has relationships with other women.

Artemis’s story was the hardest for me to read. I think it’s very true to being in your early twenties, especially if you’re involved in a social justice-type group. (Though that is entirely my own bias.) She has relationships with multiple women throughout the novel, but they seem to always end up toxic, even just as friendships. They discuss politics and activism without applying the underlying assumption of compassion and respect to each other. I found it painfully honest at times.

There isn’t a clear resolution at the end of this story, but that’s not the point. It’s immersive and atmospheric, unfolding at a languid pace while enveloping you in the poetic language. This is a book that I think would benefit from rereading, and to be honest, I can’t believe this isn’t a classic of lesbian fiction. It’s beautiful and challenging. Definitely worth the read.