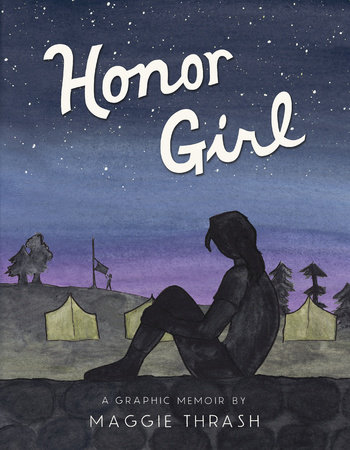 Mild spoiler warnings–nothing you wouldn’t get from reading the jacket copy, though. Reading Honor Girl is painful in the way that reading your old diaries is painful. Not the “Wow, I was stupid-shallow” parts, but the moments of earnest hope where you can see the younger you before your first real, crushing heartbreak, before you knew what it was like to feel hollow inside because of another person.

Maggie’s 15, spending her summer in Kentucky as she always does, at the same camp her mother attended, participating in the same rituals and traditions. During the school year, she lives with her upper-crust family in Atlanta. She floats between these worlds, and her most solid anchor is her love for one of the Backstreet Boys.

This summer is different, though. This summer she’s finding her place, finally, on the shooting range. And this summer, there’s Erin. The shooting might be okay, but at this very Christian, very Southern camp at the beginning of the new millennium, the slow realization that she’s attracted to Erin–and that Erin returns the feeling–is very not okay.

Maggie’s not terribly uncomfortable with her feelings, but she’s deeply uncomfortable with other people’s reactions, especially when they seem to get Erin in trouble. Maggie’s choices during that summer make this book feel in part like an expiation, and the ending is quietly devastating. This is being touted as a book about a girl going to summer camp and discovering she’s a lesbian, but what she discovers about her character, and how that knowledge informs her life afterward, is crucial.

Having been one of those kids who got along better with adults (i.e., I found camp traumatizing in and of itself), I did a little looking around. Maggie Thrash considers that summer to have been an “idyllic bubble” and a quick Google search for Honor Girl turns up adjectives like “hilarious” and “heartwarming.” In the same interview linked above, Thrash notes that the memoir isn’t about being held down by her peers, but crushed by older people.

Because this is a graphic memoir, it’s pretty much a one-afternoon kind of deal. There are more memoirs coming out in this format now. This story is particularly suited to it. Thrash clearly remembers what it’s like to be 15. It’s exciting, terrifying, funny, boring, fleeting, excruciating, and brilliant. Sometimes within the space of a few minutes.

Two people read this in my house. My fiancee borrowed it from the library and read it, then told me I should. How was it? “It was okay. It was good. Quick. You’ll finish it in like an hour and a half,” she said. I finished it and was, as I phrased it earlier, quietly devastated. This is definitely one of those books that, once set free in the world, is going to mean different things to different people, regardless of what its creator/subject intended. Good on its own; excellent conversation starter. Great for book clubs (teens and adults). Book is currently cataloged as adult bio. I’m moving it to where the YA crowd will swarm.