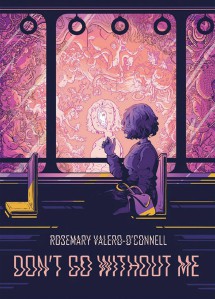 Don’t Go Without Me is a triptych of comics written and illustrated by Spanish-American artist Rosemary Valero-O’Connell which deal with ‘love, loss, and connection.’ Valero-O’Connell is best known for her graphic novel collaboration Laura Dean Keeps Breaking Up With Me with Mariko Tamaki, a book about a teenage lesbian and her experience in a toxic relationship. Don’t Go Without Me has fantastic premises with achingly familiar emotional experiences at their core. Her art style is iconic, something that is best described as ‘dreamy.’ She also uses panels in increasingly creative ways–they almost become visual line breaks in her comic poetry. Valero-O’Connell thrives in weird worlds, where every inch of space is filled with bits of plants or sky or people, creating a holistic experience for the reader.

The first, titular story follows a lesbian couple who cross to a parallel dimension and lose each other. The main character trades stories and facts about her girlfriend, Almendra, with the magical and strange residents of this other world for clues about her location, unwittingly trading away the memories associated with Almendra. The search shows off Valero-O’Connell’s character and world building skills as the main character plunges through high class parties attended by four-eyed suit-wearing men and skeleton heads and sphinxes and more. Every background character is unique and intriguing. The art is so complex and interesting that I wanted to read the whole thing again focused solely on the illustration

“What is Left” has another strange but compelling premise. In this story, a new fuel has been developed for spaceships– memory. A human donor can power engines through the brain waves generated by memories. The story follows one of the passengers, who, after an explosion, finds herself within the memory core next to the dreamer. She watches the dreamer’s life play out with no ability to communicate, struck by the knowledge that the dreamer is likely already dead. While the pages do contain a lot of sad content, it never comes off as depressing. It always feels more like a celebration of the negative emotions rather than a pity party.

The third and final story in this book, “Con Temor, Con Ternura” involves a town on the ocean, where a giant slumbers away. No one knows exactly how it got there, why it’s there, or when it will wake. The devout followers of the giant have calculated turtle migration patterns and sea levels and have determined that the giant will wake tomorrow, though no one knows whether it will kill them all or save them. Not everyone thinks it will wake, but people prepare for it nonetheless, with a huge day of feasting and partying. This is more of an ensemble piece, but the only characters that recur is an old lesbian couple, who represent love and how we reflect on it. It’s a deeply thrilling, emotional treatise on ‘what would you do if the world was ending,’ and, of course, it made me cry.

Rosemary Valero-O’Connell proves once again that she is a master of comic storytelling, visually and textually. Almost all of her stories contain, if not explicit lesbian characters, queer themes, and they all speak to some deep emotion inside of us. This comic was originally Kickstarted and published by the comics subscription service ShortBox, and I was so excited to get my hands on it. Valero-O’Connell’s work always hits and always hits hard, and I recommend this to literally anyone. Everyone deserves to read this wonderful masterpiece.