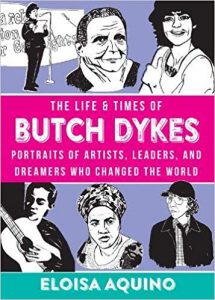 The Life and Times of Butch Dykes was originally a series of zines, now collected in a highly illustrated hardcover. I was on board from the title page, where the publisher says, “If you bought this on Amazon, I’m so sorry because you could have gotten it cheaper and supported a small, independent publisher at www.Microcosm.Pub” That turns out to be true: Microcosm Publishing has a sliding scale price!

The day that I read this book, twitter was having an argument about the use of the word “dyke,” so it was fascinating to read the intro and see how the author and publisher had considered this term. They explain that gender is fluid, that some of the people featured in the zine now identify as men (and were left out of the collection on request). Some presented their gender differently later in life. Some are non-binary and use they/them pronouns. Others we have no idea how they would identify if they had access to the vocabulary we have today. They all, however, are queer, love women, and defy gender expectations, which is the thread that holds this together.

Each zine (some have been digitally reconstructed) has a different subject. Most are biographies of individuals, but others are broad categories, like butch filmmakers, or Brazilian fern-haired singers. Every other page is an illustration, and the text is hand-lettered. There are many quotations from the people featured. This is a beautiful book to flip through.

Some of the people included are well-known figures like Audre Lorde, while others were people I’ve never heard of, like a 5’7 tattooed Japanese butch lesbian who became a hugely successful fashion model in the 90s. Even if I was familiar with the people being described, I loved seeing all the portraits. For the people I didn’t know, this acted as a great teaser, providing just enough tantalizing information that I wanted to seek out more.

I loved how diverse this collection is–not only in terms of gender and sexuality, but also race and nationality. Eloisa Aquino is Brazilian-Canadian, and she features butches from all over the world (and across time). Each gets a short biography, which often has very little to do with gender or sexuality. Instead of acting as a 101 on who and what a butch dyke is, this collection offers beacons of people throughout history and around the world who have lived their authentic lives, which inherently encourages the readers to live their own.

This is a great little coffee table book, and I think it would make a perfect gift for fans of butch dykes, gender nonconforming, queer history, or zines! I did have some minor issues: the digital reconstruction means that some illustrations have noticeable pixelation, and one line (pg 52) seemed to imply that coming out as bisexual didn’t count as really coming out, but overall I thought this was a great, one-sitting read.

This was the book voted on by my Patrons to vlog about in August! Here is my vlog, which also discusses some other sapphic books, and features my bookshelf reorganization and my dogs!

If you’d like to pick what I read next, you can support me on Patreon, and you’ll also get queer women books in the mail throughout the year!