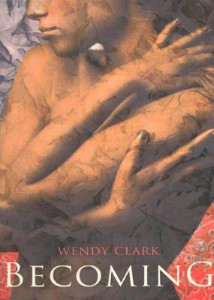 Becoming is the story of Alison and Marilyn. Told from the point of view of Alison, we follow her life from the moment Marilyn reappears in it while wandering into their common past at university.

The novel is divided into two parts. The first one, called “cocoon”, introduces us to the characters and their present. However the present is not as important as the past and only serves as an excuse to dive into Alison’s recollection of what happened during her time at university with Marilyn.
The writing is often slow and repetitive and as a result Alison appears quite dull to the reader. It wasn’t much fun to read this part but I was curious about the past and it is what kept me going. I didn’t care about the present because all that was happening seemed to always trigger the same reaction from Alison and so created the effect of repetition.

The name of that first part is quite adequate. Alison is in fact trapped in a cocoon, the cocoon of her everyday and repetitive life. In the second part however, the pace changes as we witness Alison breaking free from her safe (and boring) cocoon to emerge into life.

In the second part we remain in the present – most of the past having been explored before – and Alison is finally learning to break free from the very strict rules that had always dictated her life. She is learning to make her own choices and to question her past and the decision that have been made for her. The contrast with the first part is quite clear by the fact that we stay in the present and that we are moving instead of staying put. Marilyn and Alison embark in a road trip for Marilyn’s job which mark a the start of actual physical movement as well as psychological one.

The novel is build around the two main characters. They met at university, Alison being the shy girl from a very religious background while Marilyn is the adventurous, free and wild girl. At the contact of Marilyn, Alison learns to slowly break free from her rules. Their relationship is quite complicated. Alison is fascinated by Marilyn and her wildness. It attracts her, introduces her to a world she had been taught to think was evil but she discovers it is not as bad as she thought. She is a sort of experiment for Marilyn at the start but rapidly become her friend. Their relationship never appeared to me to be more than friendship, adoration, and idolatry which made me wonder why my library had shelved this book under the “Gay and Lesbian” fictions. Of course some moments of their relationship could be read as subtext for a lesbian love but it never felt quite right. I could only see a strange friendship in the author’s words.

SPOILERS I finally understood in the last scene of the book the shelve choice of my library, when both Alison and Marilyn finally share their burdening secrets, breaking free of those burdens and getting ready for a new life. Though what I didn’t understand was the love scene itself. For me the relationship between the two women had never been related to love in that sense. I could picture Alison wanting Marilyn because that was made quite clear but for me she was more fascinated with that woman who opened up her world than really loving her. However I really couldn’t picture Marilyn loving Alison in that way. This is probably due to the fact that we never have her point of view and always see her through Alison but still the last scene felt entirely wrong and unnecessary, like it was ruining their relationship. END OF SPOILERS

In spite of my comments, I still enjoyed reading the book as a whole (when I ignore the last scene). The first part was excruciatingly slow sometimes and it probably could have been shorter but it made sense in the end with the second part and the liberation of Alison. However the last scene was unecessary and didn’t quite fit with the rest. For me the book is about two broken women, two women who had suffered some kind of sexual trauma and have tried to live with it as best they could, and finally breaking free of their cocoons with the help, presence, and support of each other.
I wouldn’t particularly recommend this book, but if you’re interested in a story with characters trying to break free from a very strict religious background and trying to live with the burden of a kind of sexual trauma to finally come of age and accept oneself, then the book might interest you.