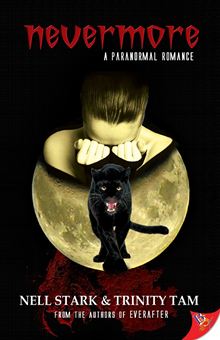 Nevermore by Nell Stark and Trinity Tam is the sequel to their previous vampire-and-shifter novel, everafter. When we last saw our protagonists, Valentine and Alexa, they had begun adjusting to life together as a vampire and a were-panther, and had taken down the vampire that forcibly turned Valentine. At the beginning of nevermore, Valentine and Alexa are living on different continents, Valentine interning close to home in New York while Alexa trains her were-panther abilities in a secret city in Africa. In everafter, Valentine decided to drink blood exclusively from Alexa, her lover, in order to delay her transformation into a full vampire, and is pursuing a career in microbiology in order to research a cure for vampirism. It is already difficult for the two to be so far apart when Valentine relies on Alexa’s blood for sustenance, but in the midst of their separation, they are caught up in a fight between sects of the supernatural community, with attacks coming from multiple directions.

There are fewer sex scenes this time around, but those that are included are just as hot as those in the first volume. Valentine and Alexa’s relationship faces new challenges, but nothing as severe as in book one. The plot in book two is more centered in the outside world the protagonists now inhabit, which is largely occupied by vampires and were-shifters but always encroached on by regular human society. I particularly like the scientific aspect of the story. In book one, we learn that vampirism and animal shifters are caused by a virus and a microbe, both of which exist as a group of subspecies. One of the problems faced by the protagonists in nevermore is a pathogenic disease that kills were-shifters, and threatens Alexa’s life. Valentine studies samples of this via electron microscope, working to find a cure. I enjoyed the explanation of the mechanism by which the pathogen operates: it takes a trope commonly seen in werewolf/shifter fiction and expands on it in a new and interesting way.

I found nevermore to be a solid, enjoyable sequel, and I was pleased to see that it improved in the areas I found weak in everafter, i.e. climax pacing and diversity of cast. This book expands the world somewhat, and answers some questions from the first book while creating plenty of new ones, so I am eager to see how the story continues to develop in this series. Among these new uncertainties, we as readers are brought to doubt whether Valentine’s monogamous blood relationship with Alexa can last. I suspect  that will be explored in the final two books, nightrise and sunfall. 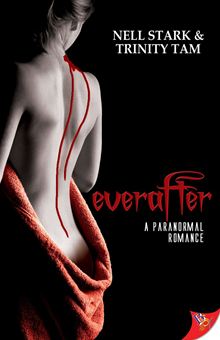 everafter by Nell Stark and Trinity Tam is an urban fantasy, vampire-and-shifter novel centered around a committed lesbian couple. Valentine is a rich, androgynous medical student whose parents are opposed to her lesbianism, and her girlfriend, Alexa, is a strong-willed, femme law student. They are in an established relationship at the opening of the novel; Valentine is preparing to propose to Alexa when she is attacked and turned by a vampire. everafter takes the science-fiction route to vampires and shifters: they are caused by a parasite and a virus, respectively. Valentine and Alexa work with both police and this universe’s secret vampire organization to track down the vampire who attacked Valentine, while simultaneously fighting to keep their relationship together through the challenges of vampirism, post-traumatic stress, and later the change Alexa goes through to better feed her lover.

What immediately impressed me about everafter is that it balances two strong-willed characters, two halves of a relationship, very successfully. Neither of the two is overshadowed by the other—both have agency in the novel, and they work as a team to face their challenges. Both Valentine and Alexa are distinct, well-rounded characters who carry the story together, and they are also seriously in love and lust with each other. The novel is well-peppered with sex scenes, most of which involve vampiric biting and blood-drinking.

While the world-setting for this story is not very divergent from vampire-and-shifter urban fantasy in general, I personally consider that a sub-genre, and thus don’t see this as a problem. My main criticism, story-wise, is that while the action rises and there is a pivotal fight at the climax, I was never very worried about the characters’ chances of survival. My other criticism is that while there is a single side character of color, besides her, the cast is fairly white, which is unrealistic, considering the novel takes place in New York City.

everafter is, overall, a strong story that I enjoyed reading, with full characters that you will want to see win their battles. It leaves some important questions unanswered at the end, which I hope to see resolved in its sequel, nevermore.