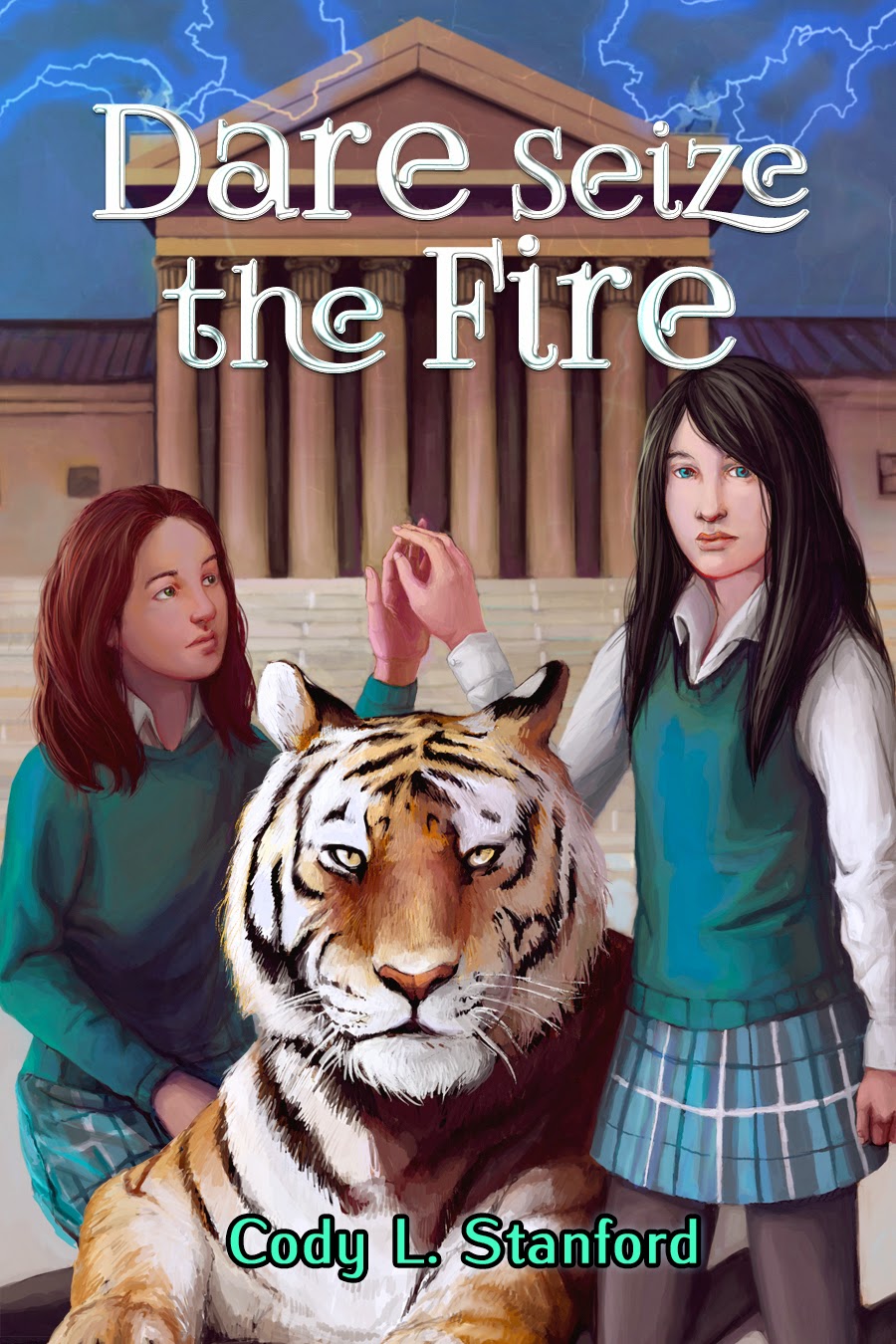 Dare Seize the Fire is a young adult adventure book with a hint of fantasy. The story is set in Philadelphia and follows Katie Zielinski which is also called Kasia, Katarzyna, Kat and my favourite: cutie-Kat. On her way home, Katie finds an escaped tiger and connects with him. His name, turns out to by Jyoti and he can talk and reason when he is around Katie. In turn, Katie realizes she has some sort of powers whenever she is near Jyoti. Which is good, because Jyoti’s previous owner, Zadornin, wants him back.

Zadornin is a warlock and calls Jyoti, Firebright. He has had him since he was a cub, mistreated him a lot and has very sinister plans for Jyoti which expand to even more sinister. Zadornin is a really, really evil person and probably you will become squeamish while he thinks or tells his past. Let’s just say that it’s not only poor animals that he has killed.

Katie, whose only troubles before were that she was in love with her best friend Laurinda (Lauri) and taking care of her autistic brother Cassie, finds herself dodging the warlock’s attempts at getting the tiger back. She does this with the help of the before-mentioned Laurie and Cassie, Agni and his son and a tiger lady. There isn’t just one confrontation between Katie and Zadornin, but several in escalation.

The story is told from multiple perspectives. I thought the writing was realistic in portraying the characters. Stanford, who by the way seems to know a lot about felines, managed to write an autistic mind, a tiger mind and an evil mind quite well, which was a bit scary. Especially at first perspectives changed in the same chapter without warning and it took some getting used to. I would have preferred to have different chapters per character which was done later on. As well, there were some time or place jumps in a chapter without warning. Lines would perhaps have helped the reader orientate themselves.

Katie’s and Laurie’s relationship is based on cuteness, sharp sarcasm and teasing. All in all, very cute. Reading about an autistic character was hard but much needed and hopefully, this will help other  readers know more about autism.

The writing is very funny at times, especially with the similes and metaphors used. One example which I thought was extremely hilarious was: “Like the mincing of an offended flamingo”. The insults thrown around in this book are also quite funny.

There were some irritating things in the plot.  The parents usually make a lot of mistakes. I also thought that leaving parents on their own when you have a powerful enemy was not safe at all! And of course, when someone is in grave danger of losing their lives, no one can agree on anything.

However, all in all, I highly enjoyed this book which also gave me a break from reading just in the Fantasy genre. The main message of the book, I think, is to let go of secrets to feel much lighter and also to unlock the potential already there. Throughout the book, Katie becomes more confidents to protect both herself and the creatures she loves. After having finished the Engelsfors trilogy, reading about a ‘witch’ and her bond with an animal made me go into ‘fond-mode’ and indeed the friendship between Kat and Jyoti was supportive and quite positive. I recommend this book to animal and felines lovers, people that want to read a cute romance that is part of a bigger plot, to people looking for autistic characters and to adventure lovers.