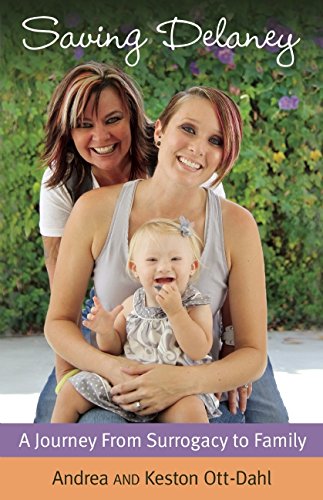 Saving Delaney: From Surrogacy to Unexpected Family is an interesting memoir and an unusual story. Written by Keston and Andrea Ott-Dahl, it’s told from Keston’s perspective as she and her partner, Andrea, become parents to a daughter with Down syndrome. Their daughter, Delaney, was longed for–but not by them. Andrea had been a surrogate for a lesbian couple who’d tried unsuccessfully to become parents other ways. The couple, Liz and Erica, were thrilled when Andrea became pregnant through insemination. Then prenatal testing revealed that the fetus had Down syndrome and the doctor predicted the fetus also had other serious disabilities and the pregnancy would likely end in miscarriage or stillbirth. Liz and Erica made the heart-wrenching decision to terminate the pregnancy. But Andrea wouldn’t. Her research suggested that the doctor was wrong in his most dire predictions and he was using standards of typical prenatal development when he should have compared the baby using the standards of prenatal development of babies with Down syndrome. Andrea decided to keep the baby and raise it herself if Liz and Erica wouldn’t, Keston got on board, and that’s exactly what they did.

Andrea and Keston’s backgrounds make the story even more complicated. Keston is sixteen years older than Andrea and has one adult child slightly older than Andrea, and a teenage son who has all but left the house when the couple meet. Andrea has two young children and is recently out of an abusive marriage to a man. Like Andrea, Keston’s children were both conceived in relationships with men and without difficulty. They aren’t prepared for the challenges of non-intercourse conception when Andrea excitedly volunteers to be a surrogate for a couple in their extended social circle. Andrea wants to be a surrogate to help the couple, and for the money it would bring in. Secretly she’s also hoping that carrying a child for another couple would help her ease the guilt she feels over an abortion she had years earlier, when she was preparing to leave her violent husband. Keston’s struggling with the recent death of her mother and the choices she had to make at the end of her mother’s life. This takes an important role in the book, as Keston’s imagined conversations with her late mother guide her and reveal her inner feelings. Some of those feelings include hate and fear of people with disabilities.

The story is largely framed around Keston’s journey away from prejudice and toward advocacy for her daughter. It’s moving, but it’s also not the most useful or nuanced frame. Plus in her pre-Delaney days, Keston says and thinks horrible things about people with disabilities. If you pick this up, be prepared for slurs and worse. If you don’t want to slog through that, don’t force yourself. I appreciated that Keston was ultimately educated, thanks to Andrea, and that she did bring some compassion when others initially weren’t accepting. It didn’t make her early beliefs or comments easier, though.

Keston tried to tell this complex story fairly, mostly avoiding easy villains, but there are some slip ups. For one thing, some of the drama of the situation could have been avoided with a little caution, planning, and communication. Keston and Andrea don’t read the contract carefully before agreeing to surrogacy, and Keston, Andrea, Liz and Erica don’t have the tough conversations they ought to before deciding to go forward with surrogacy. Tension starts before the pregnancy too, as it takes over half a year to get pregnant, they all decide to add known sperm donors into the mix without a clear legal agreement in place, and the doctor they work with isn’t a great fit for Andrea and Keston. When Keston and Andrea decide to keep the baby and raise her without Liz and Erica, they aren’t as sensitive as they could be to Liz and Erica’s devastation, or the shock Andrea’s already leery family is experiencing. It’s occasionally tiresome to read about somewhat unnecessary complication, but the many, many bumps in the road do add intrigue to the story and keep it moving along.

I felt for Liz and Erica a lot and wished I knew more of what happened after they and the Ott-Dahls stopped speaking to each other. The doctor had painted a pretty bleak picture aside from Down syndrome, and I couldn’t imagine paying thousands of dollars for a surrogate to carry on with a pregnancy that a doctor said likely wasn’t viable. The couple had already gone through fertility treatments, cycles of hope and disappointment, and had at least one adoption fall through. It made sense to me that they weren’t as optimistic as Andrea and Keston and that they wanted to have some control over the process. Trying to add a child to your family, however you go about it, can be scary and leave you feeling powerless. From their perspective, this is not a heartwarming tale.

One thing I hated in this book–and another reason that I’m a bit hesitant to recommend it–was the way Keston wrote about Liz and Erica’s infertility. More than once Keston, Keston’s imagined mother, or Andrea says something like, “Some people aren’t meant to be parents,” or implies that the couple’s struggles to have a child means that they shouldn’t have one. It was interesting to me the way this attitude connected to Keston’s self-proclaimed prejudice around ability. The idea that some experiences aren’t “meant” for a person because that person needs assistance or their body works differently is a common theme in justifying ableism. Also, the ability to get pregnant is in no way correlated with the ability to parent and I think we all sort of know that. Still, if you’re trying to conceive or have experienced infertility, reading those comments in the memoir will be horrifying, depressing and/or rage-inducing, and you might want to steer clear.

If you aren’t dealing with that and you can roll with some harsh language and inaccurate ideas about folks with disabilities in the earlier chapters, you might like this book. It’s a unique situation and it makes you think. It is an easy read, it’s fast paced, and parts of the story are pretty moving. But think carefully before picking it up, because this book is not for everyone.