Ooh, another Guest Lesbrarian! We haven’t had one in a long time. If you want to have your review of a relevant book posted at the Lesbrary, just go to the About page for more info. This is a review from Hannah on Fried Green Tomatoes at the Whistle Stop Café by Fannie Flagg. 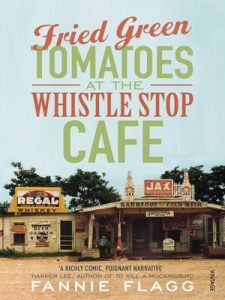 Fried Green Tomatoes at the Whistle Stop Café by Fannie Flagg is not my kind of book. There are no spaceships, serial killers, or wizards. It can be (and is) described as heartwarming and folksy, words that usually turn me off of a book faster than seeing Dan Brown’s name on the cover. That being said, Fried Green Tomatoes is a magnificent book and a personal favorite.

Many people are familiar with the movie adaptation starring Mary Stuart Masterson and Mary-Louise Parker (a very good if tragically de-gayed movie), and it’s a shame that the book isn’t more widely read. There are stories within stories here and all are as humorous and engaging as the last. The book follows two groups of people living in the same area in different eras. Evelyn Couch, an overweight and unhappy housewife, befriends an old woman, Ninny Threadgoode, in a nursing home and is inspired to take control her life. Mrs. Threadgoode tells Evelyn the story of the town of Whistle Stop, Alabama, which includes everything from true love to murder to the KKK.

In many cases where a novel is told in flashbacks, the present is used just as a vehicle for the main story, but that isn’t the case here. Evelyn and Mrs. Threadgoode are fully developed characters that the reader can truly identify and sympathize with. At no point does the reader feel like skipping over the sections of the book set in the late 80’s to get back to Ruth and Idgie in the 30’s.

The part of the aspect of the story most interesting to lesbian readers is the relationship between Ruth Jamison and Idgie Threadgoode, owners of the Whistle Stop Café. While the word lesbian is never used, it doesn’t take a genius to see that they are lovers in every sense of the word. Idgie loves Ruth (“Idgie smiled back at her and looked up into the clear blue sky that reflected in her eyes, and she was as happy as anybody who is in love in the summertime can be,”), Ruth loves Idgie (“When Idgie had grinned at her and tried to hand her that jar of honey, all these feelings that she had been trying to hold back came flooding through her, and it was at that second in time that she knew she loved Idgie with all her heart,”), and even Dot Weems, writer of the town’s weekly bulletin, knows Idgie and Ruth love each other (“Stump Threadgoode, son of Idgie Threadgoode and Ruth Jamison…”). There can be no doubt that these two are the genuine article.

Not only did this book make me laugh until I was nearly crying, but it also made me cry until I could barely stand to read another page. Very few books form such a strong emotional bond with the reader as quickly as Fried Green Tomatoes. Fannie Flagg is an incredibly gifted (and gay!) writer who has created a book that, while it doesn’t contain the wizards I’m so fond of, is not devoid of magic.

Thanks so much for the review, Hannah! Hannah also writes the Meriden Humane Society blog.

Have you read Fried Green Tomatoes At the Whistle Stop Cafe? What did you think of it? 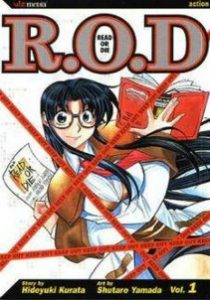 This is a classic case of “does it count?” I read R.O.D. expecting it to be explicitly lesbian, which wasn’t quite true. But first things first:

Read or Die was first a series of Japanese light novels (not currently published in English, but a fan translation is in the works) which then spawned R.O.D. the manga (a series of four) and an accompanying series of manga set in the same universe: Dream Or Die. The manga inspired an OVA, Original Video Animation, which then inspired a TV series.

I just picked up the four manga, available at my library (because I have an awesome library), not realizing how far-reaching R.O.D. is. I was easily sold on it: lesbrarian manga? Sign me up!

Well, this is the thing. I liked Read Or Die; it features a book-obsessed main character by the name of Yomiko Readman. Yomiko, in fact, is the Paper for The Library of England: she has powers that can control any piece of paper to do anything she wants. She embarks on various heroic actions, collecting pallets of books along the way.

By the end of the first manga, things were going along pretty much as expected, since the romantic interest had been introduced and hinted around. But here’s the thing… it never goes past that. Their relationship never quite becomes text, but it comes very, very close in the first manga. Think Xena and Gabrielle. Which brings me to my main question:

This isn’t anything against Read Or Die; I enjoyed it and I’m looking forward to watching the anime, plus the yuri that is hinted towards is adorable.

I was really excited to read queer women manga and I found some links for yuri published in English and free fan translations of yuri. Have you read any yuri/queer women manga? What did you think of it?