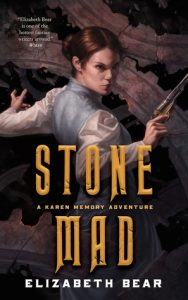 This was an odd read for me. I finished the first book and enjoyed the characters and the world, but (partly because I was listening to the audiobook), I had trouble following the plot. This is the reason I don’t typically watch action movies or read action-adventures. Still, I liked it enough that I immediately picked up the sequel, and at the beginning, I was sure I would like it more than Karen Memory. First of all, Victorian spiritualists are my jam. I love hearing stories about the rise of spiritualism and the elaborate cons carried out, mostly by women. After all, there weren’t a lot of opportunities for single women to make their own money. As Karen says (I may be paraphrasing, but this is what I remember), “Men own most things, especially white men. If they didn’t want us to cheat, they should have made the game fair.”

Another fun element was the addition of the fact that although spiritualists may or may not be legit in this universe, it’s common knowledge that creatures like Tommyknockers, sasquatches, and jackalopes exist. I had already been delighted by the mention of splintercats in the first book. But what I was most focused on was Karen and Priya. This is post-HEA, and they are trying to figure out how to be with each other when they’re not just running on adrenaline, being pulled from one death-defying adventure to the next. They clash, and it becomes obvious that they have different opinions on things like rushing headlong into danger when catching a whiff of injustice. They have to adapt to each other and compromise. It was uncomfortable, and it was absolutely true to the real, messy business of being in a relationship with someone. As Stone Mad states, it not being perfect is how you know you aren’t being conned.

Unfortunately, despite the elements I liked, I was totally thrown by the plot structure this time around. Instead of losing track of how they got from one adventure to the next, this novella starts with a dramatic encounter and winds down from there, with a mudslide thrown in at the end. I literally got to the narrator reading “The End” and looked at my phone in confusion. I thought I had somehow skipped half the book. This narrative addresses their relationship and completes that arc, but everything else in the beginning–the spiritualists and murder mystery and all the questions raised–weren’t addressed again. This literally felt like half of a novel to me, which is a shame, because I think if it had either been pared down to a short story (the first part of the book) or fleshed out into a whole novel, I would have really enjoyed it.