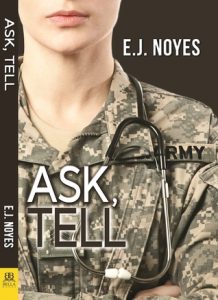 Just in case you’re unaware, author Jae is hosting Lesbian Book Bingo. There are twenty-five genre categories, including a free square in the center of the board. If you’re like me, some of the squares will challenge you to give books you might otherwise skip over a second chance. Celebrity romances and hospital dramas, for example, aren’t my cup of tea (though I did watch a shizzload of “Primetime in the Daytime” ER episodes between classes and devoured gossip magazines in college).

Aside from the joys of discovering great new books to read, if you participate you could win some sweet prizes! Starting this month and through the rest of the year, I’m going select review books based on bingo categories.

Last month I read Ask, Tell by E.J. Noyes, a romance set in the waning years of the “Don’t Ask, Don’t Tell” (DADT) United States policy, fits snugly inside the camo pocket of the “women in uniform” category. Department of Defense directive 1304.26, E1.2.8 (1993-2011) forbid US soldiers from asking about the sexuality of service members or tell others about their own or others. Prior to this, many people not only received dishonorable discharges from being targeted as gay, lesbian, and queer, they also lost out on future job opportunities and much, much more. The private and public ramifications of being labeled unfit for duty because of their sexuality had far-reaching effects.

One of the reasons that I usually avoid military novels is that I don’t want to read a 150 page plus advertisement for the armed services and that I’ve already watched countless documentaries, mini series, and movies. Thankfully, Noyes has crafted a thoughtful romance about the heavy toll that government policies such as DADT exact from queer service members.

Captain Sabine Fleischer, an Army surgeon, carries on her family’s tradition of military service. Out of range of the brass or colleagues, she lives openly as a lesbian with her supportive family, and her longtime girlfriend, Victoria. On duty, she hides all traces of her personal affairs. The pressure of leading a dual life is palpable throughout the story.

Her current deployment to Afghanistan is spent scrubbing in for surgery, hanging out with her best friend and fellow surgeon, Mitch, or crushing on her superior officer, Lieutenant Colonel Rebecca Keane. When an unexpected letter from home arrives, it triggers a surge of emotions with few healthy outlets. The novel’s romance, much like the surgeries performed on wounded soldiers, centers on patience and attention to detail as the women navigate attraction in a restrictive environment. Supporting cast of family, friends, and co-workers add depth to the story as it moves between Afghanistan and the US, between difficult decisions, and towards an uncertain future. If you’re like me, the almost snowglobe focus on routine medical procedures and DADT insulates you against the fact that they are in a war zone. Despite the battered and broken people coming through their operating rooms, the last quarter of the novel may take you off guard. Absorbing, moving, and unhurried, Ask, Tell gives readers a hard-won possibility.

Further Reading (Before & After DADT)