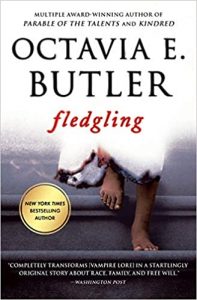 Content Warning: This review contains spoilers, but only specifics about the world, nothing plot-specific past the first chapter. I knew almost nothing about this book when I started reading it, and it was such a pleasure to be surprised, so if you like vampire stories, or Octavia Butler, I highly recommend it and you can stop reading this review now and just go pick up the book.

I didn’t know a lot about the story as I read it, and I don’t want to spoil anyone else’s experience of the meticulous, expertly woven unfolding that Butler does in the first few chapters, building a new world and explaining to us readers, slowly, what it is to inhabit this world. The nice thing is, the main character and narrator, Shuri, has completely lost her memory, and though she previously had a place in the world, has to re-learn everything she knows about how her tribes communicate, the social politics, and how things manifest. She slowly re-learns what her brain injury took from her, and in the process, builds her life from scratch.

Did I mention Shuri is a vampire?

Did I mention Shuri is Black, but the vast majority of vampires in this book are white, and Shuri is the result of a genetic experiment to encourage vampires to be able to withstand sunlight (which she can)?

True to form, Butler uses this particular trope of the vampire to discuss and investigate race relations, among other things, like sexism, classism, homophobia, and ageism.

As a person in kink and D/s relationships, I particularly loved how Butler depicted the symbiotic relationship between vampires and humans. It’s slightly different than in other vampire lore, but, as a fan of the genre in general, I found it believable and exciting. I loved how there was both a choice and a physiological component that bound them to each other, with a point of no return after a certain amount of contact.

Fledgling is the last novel Octavia Butler wrote and published, and I have read critiques and assessments that said it was clear Butler had created an entire world, and that Fledgling was just the tip of the iceberg in that world. I felt fairly satisfied with it as its own story, after I read it, knowing that there weren’t any others in the series, but the idea that Butler had a trajectory of the story already in her mind, but that is now lost and I will probably never read, does feel incredibly sad for me. I will only have to imagine into the future of Shuri’s world for myself. 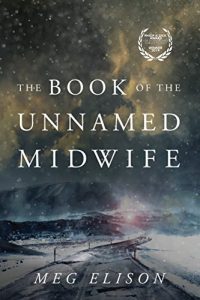 A friend recommended I read The Book of the Unnamed Midwife by Meg Elison, saying it was one of her favorite novels, and I trust her taste, so I picked it up. I was hooked immediately.

I didn’t know a ton about it going into it, so I don’t want to say too much about the plot so as to give you that same satisfaction of watching the events unfold.

I will say that it’s a speculative fiction novel, with a woman main character who is bi, and a lot of feminist commentary about surviving in a post-virus US. There’s a fair amount of survival skills and navigation happening throughout, too. I read it early on during sheltering in place, and while it was eerie to think we might be heading there, I still just could not put it down.

If you love speculative fiction that is queer, feminist, very thoughtful, and badass, this is the one for you. Just a warning, though — it was very violent in parts, and sometimes disturbingly so.

The book is the first of in a trilogy, and it only gets more queer, and the violence continues, as it goes along. I loved the last book, called The Book of Flora, and it goes even deeper into what it means to be a woman, to have a place in culture, if it’s possible to be redeemed or forgiven, how choices bring similar people to vastly different conclusions, and more big human themes.

What was so great about it? The entire world that Elison built is fantastic, and I love how much it reads like a historical document because of how she’s set up the unfolding of the timeline. (You’ll see what I mean when I read it.) It’s incredibly well written; I adore these characters and I feel the way I felt after finishing the TV show Six Feet Under: that I miss these characters and want to hang out with them. Perhaps I feel they have something to teach, or I have something to learn from them?

Speculative fiction (particularly books geared more toward YA, but adult too) is one of my favorite genres, and I’ve read it more than ever this year, despite our world feeling like we are in a novel like that sometimes. I go to it for escape and entertainment, but also because it grapples with big questions, particularly around trauma, survival, and psychology, and I love sitting with them and pondering. Now more than ever, we have to figure out how to take care of ourselves, our loved ones, our communities, and take care of the planet. The cutting edge writers of speculative fiction have been pointing us toward motivation, inspiration, and action for a long time, and it’s time to listen.

In short, there’s some horror in this book. Nasty behavior of a sick, sexist, transphobic, homophobic, racist, and colonialist society. But there’s hope, too, and beauty, and love, and illumination of so many things worth fighting for, and worth living for.