Eli and Anna know the routine. The cops come to the door in the middle of the night, Eli tries to look as young and adorable as possible, then Anna puts on eyeliner, grabs a beer from the fridge, and tries to sweet talk them into looking the other way about the two teenagers left alone while their mom is in the drunk tank. Soon, their mom will come home again, all apologies. Eli will forgive her immediately–though she doesn’t really buy the promises. Anna will run up to her room and slam the door. It’s not a great routine, but it is familiar.

Except that this night, something changes. Their mother has gotten her second DUI in about a month, and there’s no looking the other way. She has to go to rehab. But her being in rehab means social workers, and foster care, and splitting Eli and Anna–Peanut Butter and Banana, as they call each other–apart. They’re determined to find a way to stick together, including Anna pretending to be their aunt taking care of them. But the longer they have to keep up the act, the more it seems like their luck is about to run out.

Middletown is a YA novel from the point of view of a 13-year-old. Eli is struggling through middle school. She has to two great friends, Javi and Meena, but she doesn’t feel like she really fits in with them. Meena is gorgeous and has a picture-perfect home life. She’s also straight, and Eli has a hopeless crush on her. Javi is gay, obsessed with Drag Race, and he’s the principal’s son. They both have big, vibrant personalities, and Eli feels like she doesn’t belong with their duo. When she’s not around them, she’s bullied for being too “boyish”–and she can’t say they’re wrong. She doesn’t exactly feel like a girl or a boy. Or maybe she feels like both.

When her mom goes to rehab, she’s left with just her sister at home. Anna and Eli used to be inseparable, but Anna has changed. Once a girly soccer star, now she’s withdrawn, angry, dresses all in black, and she threw out all her soccer gear one afternoon without explanation. They need each other and they love each other–but they’re kids. Anna tries her best to take care of Eli, but they’re playing an impossible hand. They need to find money for groceries and rent, make food for themselves, keep the house livable, and not let on to anyone that they’re doing it alone. That’s not even mentioning trying to process their anger and pain at their mother’s neglect.

One of the things I appreciated the most about this story is the nuanced portrayal of addiction. Their mother hurt them, but she’s also not a villain. She’s a flawed person who also loves them deeply and has done a lot of good, courageous, and selfless things in her life. She’s just dealing with addiction. It also emphasizes that addiction is hereditary. We see the damage addiction can do, but we also see examples of recovering addicts and how that damage can be repaired or at least worked through. There are no easy answers, and people aren’t treated as disposable for struggling with addiction.

Of course, you’re reading a Lesbrary review, so there is also significant queer content here. Eli likes girls–Meena in particular–and is also questioning her gender. She’s still young and figuring herself out, so we don’t get any solid identity labels, but I imagine she will grow up to identify as non-binary. One of my favorite moments of the book is when Eli and Javi go to a production of Rocky Horror Picture Show. They both dress in drag, and it captures the magic of first encountering a queer community. It gives Eli a glimpse into an expansive future that will embrace whoever she ends up being, and I think that’s an incredible experience in any queer person’s life.

I don’t want to spoil anything, but the second half was my favorite, which involves a road trip and discovering family secrets–including more queer content. I love the complicated, resilient family portrayed here. They don’t always know what to say to each other, they can accidentally (or impulsively) hurt each other, but they love each other and try to be there for each other.

Read this one if you like: complicated, flawed, and loving families; road trips and family secrets; queer community and resilient friendships; characters questioning their gender; sneaky revenge on misogynists; or nuanced portrayals of addiction. 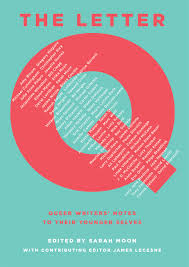 It is a truth universally acknowledged that LGBTQ teenagers must be in want of queer mentors.  Thanks to Editor Sarah Moon, it’s now possible for them to glean the wisdom of a variety of LGBT role models in just one trip to the library.

The Letter Q: Queer Writers’ Notes to Their Younger Selves is a compilation of letters from sixty-three LGBT writers – from literary greats such as Michael Cunningham, David Levithan and Malinda Lo to lesser-known authors, editors, playwrights, and cartoonists.

The sheer number of contributors is impressive, and ensures that there is a diverse collection of perspectives.  While The Letter Q can be a bit repetitive at times (as you might expect), it is well organized – the cartoons break up the text, and the length of the letters allow it to be a quick read.

Although there is a wide range of experiences represented, there are noticeably more stories from male writers than female.  The real lack is in transgender stories, however – only two contributors are trans*.

Identities beyond LGBT (intersex, pansexual, asexual, etc.) are not mentioned; while the book does not purport to include these experiences, their absence is indicative of how even an anthology marketed with a queer audience in mind is pushed towards the mainstream.

Additionally, there are no stories from indigenous writers, and surprisingly, none focused on religion.  While I understand that not every perspective can be included in one compilation, the stories that are missing speak to perhaps the most marginalized groups.  I suspect the teenagers searching for those stories are the ones who need this type of anthology the most, and hope their feedback will spark a conversation about more inclusive editions in the future.

I will say that one of The Letter Q’s strengths lies in its illustration of how queerness relates to race, gender, and class.  Many of the selections reflect not just on gay identity, but how being a gay/lesbian/bisexual person changed the writer’s relationship with her blackness or femaleness or lower-class status, for example.  This intersectionality is especially important for young readers to understand – that coming to terms with your sexuality will also change how you see other aspects of yourself.

Overall, The Letter Q is well worth the read.  Despite its omissions, it is still a step in the right direction in terms of supporting LGBTQ teenagers, and will be a source of comfort to all the girls wondering why they feel that inexplicable urge to kiss their best friend.