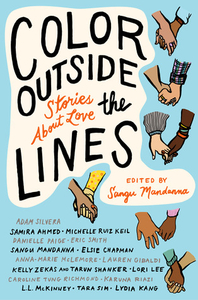 Color Outside the Lines is a YA romance anthology of interracial love stories. (I’m not sure if the LGBTQ+ stories are also all interracial.) Perhaps it was unfair of me to pick this one up: I’m not a huge romance reader, especially when it comes to straight romance stories. I’m definitely not the teen romance reader this is aimed at. As with all anthologies, some stories stuck with me more than others, but for the most part, I didn’t find this collection particularly memorable. Some stories stood out, but I often felt like stories dropped off suddenly without a satisfying conclusion, or that I didn’t get a good sense of the characters before it was over.

Most of these stories are M/F, but there are three sapphic stories included. (The ARC I received was missing at least 2 stories including Anna-Marie McLemore and Adam Silvera’s, so the final collection will likely include more queer stories.)

“Your Life Matters” by L.L. McKinney: I wasn’t sure how to feel about this one. It is about two teenage girls in a relationship. It begins with a fight: Candace, who is Black, wore a Black Lives Matter shirt to dinner at Ari’s house. Ari is white, and Ari’s dad is an “all lives matter” cop. Ari is angry that Candace “started a fight” by wearing the shirt to dinner. Mild spoilers: it turns out that Candace is also a superhero, and she ends up at the same Black Lives Matter protest as Ari’s dad. [Spoilers, highlight to read:] Despite Ari’s father almost shooting her unprovoked, Candace rescues him from what would have been a fatal situation, and from his hospital bed he reluctantly admits she might have a point. The story doesn’t let him off the hook by completely redeeming him, but Ari’s defense of him at the beginning of the story and this ending had me feeling on edge–which may have been the point.  [End of spoilers]

“Death and the Maiden” by Tara Sim: This was probably my favourite story in the collection. This is a Hades and Persephone f/f retelling–perfect for fans of Sarah Diemer’s The Dark Wife. This time it’s Parvani who goes into the underworld, though, making this not only a queer retelling but also a switch of cultural context. This is a rich, encompassing fantasy world that made me wish that it was a full novel. The relationship between Parvani and Hades is much more consensual than most depictions of this myth, and I liked how it built. Parvani also goes through a lot of growth and change. This was an exceptional story.

“Gilman Street” by Michelle Ruiz Keil: This story follows a Latinx girl who spontaneously decides that instead of taking the bus to school that day, she’s going to head down to Gilman Street, following in her mother’s hippie past. She is sick of her best friend’s obsession with her new (racist) boyfriend. She is instantly swept up in a stranger’s world: she bumps into a girl and gets invited to her concert, complete with a mini-makeover, where they celebrate their shared Latinx culture. Tam is immediately attracted to this girl, and they flirt and bond over the course of the night. [Spoilers] She soon loses track of the girl, though, and ends up flirting with a boy by the end of the story as well–with the recognition that her school may have more possibilities than she originally thought. [End spoilers]

Honestly, I think this collection is worth picking up just for “Death and the Maiden” if that story interests you, and I’m sure McLemore and Silvera’s contributions are great. But for all the stories averaged out, this was not a favourite of mine.