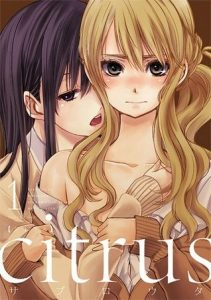 Generally I don’t subscribe to the idea of “guilty pleasure” reads, but yuri manga is definitely the closest that I’ve come. The ones I’ve read have been addictive, engrossing, but they leave me with the same feeling binging on junk food does. Citrus Vol 1 definitely fit into that category for me, though it did some things better than most of the other yuri I’ve read. It was a fun, sort of trashy read.

The strength is definitely the art. Especially in the first few glossy, full-color pages (the rest is in black and white), I was impressed by the attention to detail, especially in the girls’ faces. The main character is Yuzu, a loud, mischievous, and overall adorable girl who has just moved. She’s shocked by the strictness of her new school, which leaves little room for fashion or boy-chasing, her usual pursuits. She immediately comes into conflict with Mei, the student council president, who has no tolerance for her. Then, plot twist, Mei turns out to be Yuzu’s new stepsister! (One of the Goodreads reviews calls this “incest erotica,” which I think is going a little far. There are some make out scenes, and they do go on about the “sisterly love” thing more than I’d like, but they are stepsisters who have just met, and it doesn’t approach what I would call erotica.)

There is definitely some questionable consent in several scenes in this, but I think what sets Citrus apart is that there is reason for this: Mei is repeating the sexual abuse that she’s experienced. Where Yuzu is generally carefree, Mei is reserved and brooding, and we learn that she’s in a relationship with a teacher who is using her for her family connections. She has largely accepted this is her fate, but she lashes out at Yuzu because of this pain–which doesn’t excuse it, but it does explain it. They definitely don’t have the healthiest dynamic because of this, but you can really see that she’s coming from a place of pain and of self-sabotaging any relationship she might have with someone who cares about her.

This does have the heteronormativity and internalized homophobia that I’ve come to expect from yuri: lots of “that’s not what girls do” and being called a “deviant,” for example. For all its faults, though, I think the art style and the nuance to their personalities made this stand out for me. I have already requested the next two volumes from the library, so that tells you what I really think of it.

If you have yuri recommendations, especially ones without the heteronormativity and internalized homophobia, let me know!