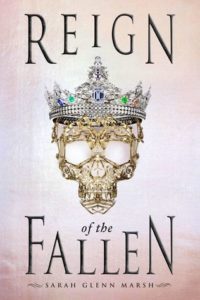 [this review contains minor spoilers and discusses depictions of violence and substance abuse in the novel, particularly in paragraph three]

Reign of the Fallen is a refreshing and original addition to both the fantasy and the queer YA genres, a welcome departure from more formulaic and predictable novels that populate both areas. Sarah Glenn Marsh’s protagonist is a flawed, confused, intelligent and charismatic young woman named Odessa. Her already complex and dangerous life as a mage who raises the dead becomes even more complicated when monsters and unseen enemies descend en masse into the mythical kingdom she calls home. Marsh spends much of the first third of the novel explaining the magical properties and politics of the kingdom and populating Odessa’s world with compelling supporting characters including a Princess who moonlights as an ingenious inventor, a coarse and brash but kind fellow necromancer, and a sea-faring pirate mistress who flirts with Odessa incessantly. At times this initial storytelling exposition gets slow and somewhat tedious but Odessa’s grounded and relatable first-person narration and the promise of more action and development prevents these chapters from feeling too stale.

While the book is labelled an “LGBT love story”, Odessa begins the story with a heterosexual male partner, Evander, who works with her as a necromancer; it is quite some time before there are any more than brief references to any characters’ queerness. Thankfully in this fantasy universe queerness is generally accepted without issue and Odessa herself as well as many of her friends are openly attracted to people of the same gender. But the queer overtones in the novel only really get going with the introduction of Evander’s sister Meredy about halfway through, a fiery and strong-willed beast mage. Oh, and a raging lesbian. Her presence becomes the motor behind much of the rest of the story and she prompts both Odessa and the novel to action. It is worth bearing with the more conventional beginnings of the novel, in regards to both fantasy and heterosexual norms, in order to reach the chapters that blow apart expectations and formulaic arcs. The ensuing drama is compelling and well worth the wait.

As may be expected in a novel starring a mage who raises the dead, there is quite a bit of violence in this book and much of it, while often unrealistic, is graphic. In addition, a major character becomes dependent on a substance that leads to their life unravelling and mental state rapidly deteriorating. While the substance is referred to as a “potion”, it is a clear metaphor for alcohol or mind-altering drugs, and some readers may find it distressing to see addiction depicted in such glaring detail. The novel is to be congratulated for how many bisexual, gay and lesbian characters it features, but it is disappointing that there are no trans characters where they could easily have been included also.

For the most part, Reign of the Fallen is a highly successful merging of the fantasy and queer coming-of-age genres, and the second half of the novel is a particularly fun and interesting read.