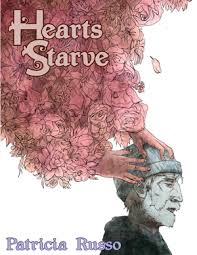 Hearts Starve, Patricia Russo’s haunting novel, is a story about loss. Not the act of losing, the reality of loss. People who have already lost things and must confront their doomed actuality. For such depressing subject matter, it’s still a beautiful and heart wrenching book.

Told as a dark, urban fairytale, the story follows three different people in various states of desperation. Marleen, arguably the story’s protagonist, lives with her wife and her wife’s dying father and feels more and more trapped in her situation. Corrie, an unemployed drifter, tries to turn her life around and finds obstacles at ever turn. Gil, the most unexplained character, barely exists in reality and tries to understand his own impulses and urges. All three are loosely linked by their dealings with two otherworldly brothers who seem to wreak havoc on anything they touch. One, a nameless man in a red coat, slips something into Marleen’s coat that permanently alters her reality and brings into Corrie’s orbit as they briefly try to help each other.

The fairy tale aspects of this story represent an interesting way for Russo to highlight each character’s loss. Here are three people who were already doomed before they were touched by the book’s fantasy elements. The unexplained chaos of the two brothers doesn’t help them or bring them any peace, if anything it just brings the desperation of their situations into sharper focus. It’s a good device but one Russo probably could have mined more from. She clearly knows a lot about this world, but, perhaps because of the darkness of each character, we don’t get to see much of it. Each character’s situation is unique, making hard to get a grasp on the rules of the world which probably would have brought the weight of understanding the end of the story. Regardless, the final scenes are still poignant and, days later, I’m still thinking about this book, which must mean Russo is doing something right.