I listened to this short story as part of the audiobook How Long ’til Black Future Month, but it can be found for free online at Lightspeed Magazine.

I’ll start this review off by saying that I think NK Jemisin is an incredible writer. Her Broken Earth trilogy was dark and often painful to read, but it was such an incredible work with beautiful craft, and I’ve been wanting to read more of her work for a while, but I wasn’t ready to commit to another long series: naturally, her short stories proved to be an excellent solution. In some cases, they also acted as an exploration (and teaser) for her other books, proving that yes, I do indeed need to read all of them.

“The Effluent Engine” takes place in an alternate history New Orleans, albeit one that is not so far removed from reality. It really packs everything into a small space: spies and intrigue, chemistry and engineering, romance and revolution. The main character, Jessamine, is a Haitian agent whose mission is to find a scientist who will develop a safe way to extract methane gas from the refuse generated by rum production, so they can produce their own fuel for their dirigibles. But she isn’t the only one after such a mechanism, and she has to avoid enemy agents who want Haiti to go back to being an enslaved nation.

This story, although short, has a deep and satisfying plot. It feels like reading a novel, because so much happens in a short space of time. There is plenty of action, but also a great sense of space and time passing. There isn’t a huge cast of characters (although with spies, scientists, and eavesdropping nuns, there are plenty!) but there’s lots of complexity to the ones we have. And most of all, this story is just plain fun to read. It’s exciting and romantic, with enough seriousness backing it up to keep the stakes high. I absolutely recommend anyone who had time to read this review to take a minute and go read the story itself. 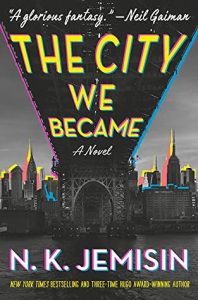 “People who say change is impossible are usually pretty happy with things just as they are.”

In today’s world, amidst the ongoing tensions caused by the fight for racial equality, isolation from the Coronavirus, and political dissent in the aftermath of a negligent administration, it seems that humanity is more divided than ever. N.K. Jemisin’s The City We Became erases those arbitrary borders, and reminds us of the power of diversity and togetherness in the face of adversity and prejudice.

Each city is born, lives and dies. Now, it is New York City’s time to shine. Five individuals, all of varying creeds, races and identities wake up as the manifestation of New York’s boroughs: Brooklyn is a Black rapper turned politician, who fits in time as a single mom alongside her never-ending work for her community; Bronca, or the Bronx, is a Native lesbian who’s not afraid to use her steel-toed boots to protect her love for art; Aislyn of Staten Island is a troubled young woman, weighing her personal worth against her family’s traditional, conservative values; Padmini of Queens is a tech-savvy, happy-go-lucky South Asian immigrant; and Manhattan, or Manny, for short, has fallen head over heels for his city, and is determined to save his love. Brooklyn, Bronca, Aislyn, Manny and Padmini must put aside their struggles to become one New York City. Their task? Defeat a Lovecraftian ‘Karen’ who uses her xenophobic tentacle monsters to infect everyday New Yorkers with contemptuous paranoia, and drive citizen against citizen. This novel is a love letter to New York City, and what it represents: community, dreams and a can-do attitude.

Personally, the characters and their relationships are what makes the novel great. N.K. Jemisin creates characters that you can root for, but also criticize for their flaws, channeling inspiration from Sense8 and Good Omens. Characters clash and connect, and must put aside differences to understand and help one another. The diversity in this book allows the characters to feel like genuine New Yorkers, evocative of the melting pot of the city. Almost every character in the novel is a person of color and/or queer, and their identities influence their borough of the city, and the fight as a whole.

Bronca, the lesbian grandmother of our dreams, is bad-ass, ambitious and impassioned, determined to take no shit and pay it no mind. Bronca is a deeply flawed individual, prone to picking fights with others as a coping mechanism. She stood her ground at Stonewall, at Act-Up, and during today’s rise of right-wing ideology, she becomes the victim of a white supremacist smear campaign over the course of the novel. It is not until she realizes those around her love her and want to help her that she is able to rally her community around her and find justice in their compassion and empathy, demonstrating the importance of queer community.

N.K. Jemisin takes H.P. Lovecraft’s tentacled horror monsters, and makes them her own, utilizing the Cthulu to dramatize the insidious nature of injustice at the heart of modern society. Jemisin’s subversion of Lovecraft allows her to topple a racist institution, and build a new one in its place. Today’s bigotry is dramatized in the form of The Woman in White: a wealthy white woman who gentrifies neighborhoods and disregards those who actually call them home. Jemisin calls out modern day prejudices in all degrees, from internet doxxing, to sideways glances and microaggressions, to outright disrespect and violence.

This is one of the most unique science-fiction novels I’ve read in a long time; it feels fresh and innovative, and dissects real, harsh truths in our society. It describes not only what it means to be a marginalized New Yorker, but what it means to be an American: the desire to fit in and band together as a diverse community, but having to face discrimination at your front door. N.K. Jemisin is THE science-fiction writer to look out for, as she combines the classic hallmarks of the genre with allusions to current events, imbuing her narratives with humor and candor. So, queue up Janelle Monae’s Dirty Computer and buckle up for a wild romp around New York City.