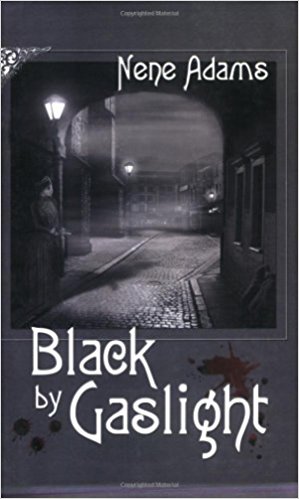 There’s a lot to say about this novel—both good and bad. It starts out like a house on fire but finishes in smoldering ruins. Here are some of the good things. First, there is the setting: 1888 London, smoggy, dark, and smelly. Lady Evangeline (Lina, or “the dark-haired lady”) St. Claire is an independently wealthy private investigator. She is tall and strong and versed in the martial arts, like Xena, who, along with Sherlock Holmes, is her inspiration. The Gaby/Watson character is called Rhiannon Moore, who Lina rescues from a life on the streets after falling in love with her at first sight.

In an odd twist, there is another Sherlock Holmes character that plays a big role in the novel. He is called Sherrinford Pike, who lives with his lover, Dr. Ormond Sacker. Lina’s love/hate relationship with Pike is charming and often hilarious. When she accuses him of shooting at her through a dressmaker’s window, he denies it, “even if I did once introduce a cobra into your sitting room. . . . Besides, I thought that you’d sworn not to mention that unfortunate incident with the air rifle again, St. Claire. . . . [and] the arsenic-filled bonbons were an honest mistake committed only once.”

And if that sounds a bit over the top, well, so is everything else in Black by Gaslight. Lina’s language is the language of Jane Austen squared—or maybe the language of the penny dreadfuls that Rhiannon delights in reading. “Rage beat at her and filled her veins with liquid fire. A red mist enshrouded her vision.” And to be truthful, the language is often so well—or oddly—crafted that it escapes being simply romance-novel drivel and often rises to the level of actual creativity. So does the relationship between Lina and Rhiannon. Both are smitten with the other at once, but neither thinks it appropriate to mention it to the other. And when their passion gets the best of them—as it does in strange situations, such as in a carriage when they are chasing a murderer—they will then play it down, or try to pretend it didn’t happen.

But it is almost as if the author gets tired of the novel halfway through. Repetition creeps in, as do inanities. The language becomes tedious, the amount of attention to describing Victorian-era women’s attire takes up too much space, the love story becomes sappy, important incidents are forced—rather than intelligently woven—into the plot, gore is splattered more-than-generously on virtually everything. And then there is the ending, where at least one of the women takes a series of actions so stupid that it defies even my imagination—which is one that has seen more than its share of ridiculous endings. It becomes just another Sherlock Holmes versus Jack the ripper novels, with Jack as someone that constantly hears the voices of prostitutes talking to him. Motivation? Backstory?

The main thing wrong with this novel is the same thing that is wrong with most independently published books in general and lesbian mysteries in particular: the lack of an even halfway-decent editor. Yes, this is an Uber novel and one that was almost certainly first posted to a fan site. And yes, fan sites are notorious for their unabashed enthusiasm for everything Xena (or everything Hermione or everything Kate Janeway) and lack of critical sensibility.

But lack of critical thinking bespeaks a lack of education, and a lack of education is the downfall of civilizations. If you don’t believe me, look around you. What’s worse, competent editors are very few and far between—it takes a great deal of study and reading to even attempt it, while university courses in the fine arts are becoming more and more unfunded. And let’s go even further; good editors command a respectable fee—as indeed they should—and few budding authors or even independent presses can afford one.

So too bad, what started out as a potential Top 20 List novel turned into something that I finished with a sense of relief. What could—with a very competent editor—have been rated near a 5 ends up at somewhere near a 3.

For 250 other Lesbian Mystery reviews by Megan Casey, see her website at http://sites.google.com/site/theartofthelesbianmysterynovel/  or join her Goodreads Lesbian Mystery group at http://www.goodreads.com/group/show/116660-lesbian-mysteries 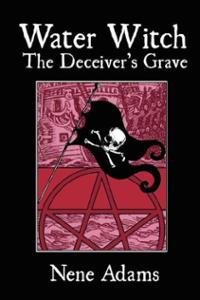 Novels about lesbians and pirates seem to be an ever-growing popular genre. I’m happy to recommend a book that has these things: Water Witch: The Deceiver’s Grave by Nene Adams.

The story starts as female pirate captain, Bess O’Bedlam, goes to Antigua to follow up on a rumor about the whereabouts of another pirate, Fancy Tom Carew, and his lost ship, the Deceiver. Treasure is believed to have been on board Carew’s ship, and Bess loves gold, so the opportunity seems too good to pass up. She learns that another woman, Marguerite de Vries, may be the key to finding the treasure. So she kidnaps the woman and brings her aboard her ship, the Mad Maudlin.

Marguerite, an orphan-turned-thief, has no idea why she is linked to Tom Carew, except for a strange tattoo on her shoulder that she’s never been able to really explain. At first, she and Bess hate each other and then they try to seduce each other for their own gains, but in reality, there is a genuine attraction between them that neither will admit at first. As they get closer to finding the Deceiver, Bess and Marguerite soon learn that there is a lot more at stake than just lost treasure, and there are supernatural forces at work.

Water Witch, though it takes place in a real time period, has magic, demons, witch-fire, and spook-binding spells that give the book a more ghostly appeal. So many characters in the book have some knowledge of magic. That takes away some realism from the book, but not much, because the rest feels so real. And the magic is a pretty good touch.

The story itself, besides the supernatural, seems very much in keeping with what went on in the Caribbean in the eighteenth century. There is nautical jargon and old slang terms that I had to look up in the glossary. Though annoying at times to stop in the middle of a tense scene to look something up, the story certainly seemed more authentic.

Water Witch was packed with action, especially near the end. Sea battles, demon attacks, sword fights, and a deadly showdown kept me reading. There were unexpected twists and surprises. The book was very descriptive, even at the gory scenes, that I could easily picture what was going on. There were no moments of wondering where the characters were, or what they were doing. Everything was pretty clear, which made it easier to enjoy the book. The best part of the novel was watching Bess and Marguerite slowly acknowledge their love for each other and throw their differences aside. There were definitely “Oh my gosh!” moments, and “How will they make it?” scenes that are nail-biting. But it works out satisfactorily in the end. My only problem with Water Witch was that I didn’t learn much about Bess’s past. Marguerite’s story was well told, as it was necessary for the plot, but I would have loved to know more about Bess’s childhood, her parents, and what drove her to become a pirate. I got tiny hints here and there, but not enough to clearly form her story. This made her a bit less fleshed out than I’d like.

Besides that though, Water Witch: The Deceiver’s Grave was a gripping, well researched read. It’s definitely not for the faint of heart, but for hardcore pirate fans. Still, the adventure was fun, and the book never got boring once. Nene Adams clearly put a lot of work into her story, and it shows well. I’ll be reading this one again!